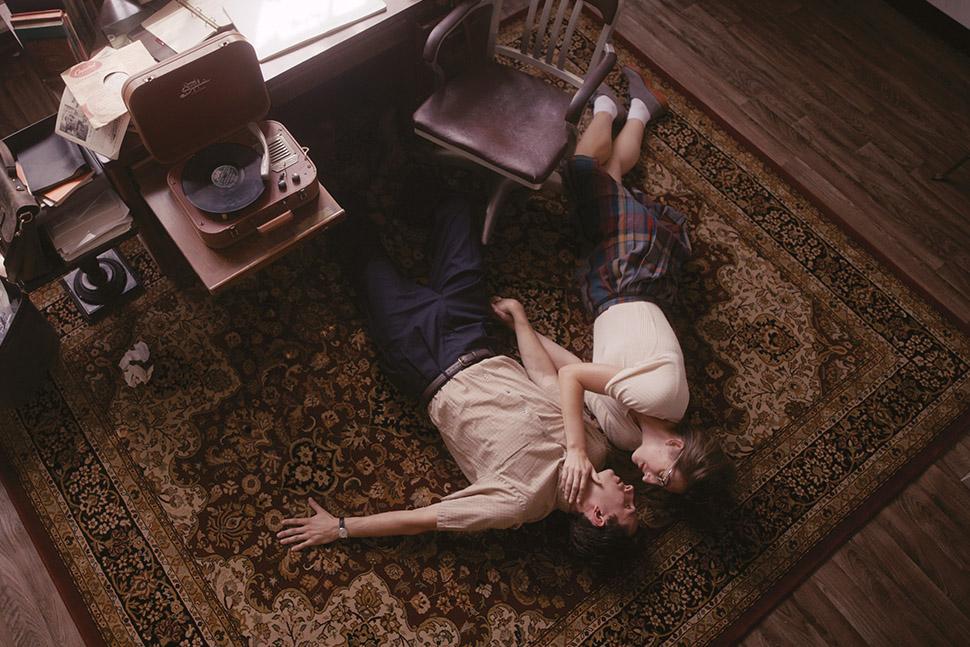 The Compassionate Spy chronicles the life and career of American physicist and spy Theodore Hall (1925-99) best known for his involvement in creating the atomic bomb during World War Two, and passing the secrets of the ground-breaking invention to the Soviet Union.

Based on live interviews with his surviving spouse Joan, and archive footage of Theodore in the final months of his life, along with interviews with Joseph Albright and Marcia Kunstel (Bombshell The Secret Story of America’s Unknown Atomic Spy Conspiracy), awarding-winning documentarian Steve James pieces together a sinister and compelling account of the atomic years and the couple’s life together from their first meeting at the University of Chicago, when Joan was only 17, until Ted’s death in November 1999. And although James maintains his distance, Joan presents a resolutely affectionate view of her husband and his work. And while Ted expresses a certain degree of regret for his actions, Joan is clearly besotted by her ‘child prodigy’ husband and his achievements and maintains a hagiographic stance to this day.

So the focus here is Joan’s glowing account of her early years with Ted and their close friend Savile (Savi) Sax, the three remained inseparable until Joan, a budding poet, decided to give up her idea of playing the field until her late twenties. She would eventually marry Ted in 1947 in what seemed like a natural progression, both Socialists from Russian Jewish backgrounds but Ted grew up in New York and Joan was from Chicago, and so in love she admits – on discovering his incendiary activities – she would have married Ted even if he had been a murderer.

In 1944, Ted was recruited as an 18 year old Harvard senior to be the youngest physicist on the Manhattan Project at Los Alamos where, in order to get ahead of the Germans, he handled experiments for the implosion device (“Fat Man”) and helped determine the critical mass of uranium for “Little Boy”.

But when the war was over, Ted failed to shared his new wife and colleagues’ elation felt after the successful detonation of the world’s first atomic bomb, when Japan and Germany were already defeated. And here James interweaves shocking images of the widespread destruction of Hiroshima where 340,000 citizens died to avoid the necessity of an US invasion.

Ted was concerned that the consequences of an American monopoly of atomic weapons could lead to a wide scale nuclear catastrophe, and was especially worried about the possibility of the emergence of a fascist government in the United States. At the time the Russians were viewed through rose-coloured spectacles in America, having been allies against the Germans. And this favourable sentiment was reflected in films like Mission to Moscow (1943) that was nominated for an Oscar but went home empty-handed.

For his part, Ted admits (in the interview) to finding the Russians approachable – “they even had a sense of humour!” – so he decided to pass key information to the Soviet Union. And while on a vacation in New York City in October 1944, he visited the Communist Party USA (CPUSA) offices, instead of the Soviet Consulate (where he feared FBI surveillance), in order to locate a suitable contact to pass information about the Manhattan Project along to the Soviet Union.

After a few recommendations, he met Sergey Kurnakov, a military writer for Soviet Russia Today and Russky Golos, and handed him a report on the implosion bomb, and the scientists who worked at Los Alamos. Saville Sax delivered the same report to the Soviet Consulate a few days later under the guise of inquiring about relatives still in the Soviet Union.

Hall later talks of his regret at passing on the secrets, but Joan points out that his failure to do so would have resulted in misfortune for the whole world. The couple would go on to have three children, one getting killed in a bicycle accident, they shares their views, along with Savi Sax’s son and daughter who reflect on their father’s reaction to his involvement but admit that his activity had possibly less of an impact on the family. James also shares ample footage of the Rosenberg couple who went to the electric chair in 1953 for their spying activities, Ted considering them guilty of a minor offence.

Densely researched and revealing A Compassionate Spy is packed to the gunnels with photos and archive footage, and enlivened by occasional musical hits of the 1940s, this is fascinating film but the one to one interviews with Joan Hall are sometimes too heavy going. MT

VENICE FILM FESTIVAL | OUT OF COMPETITION.