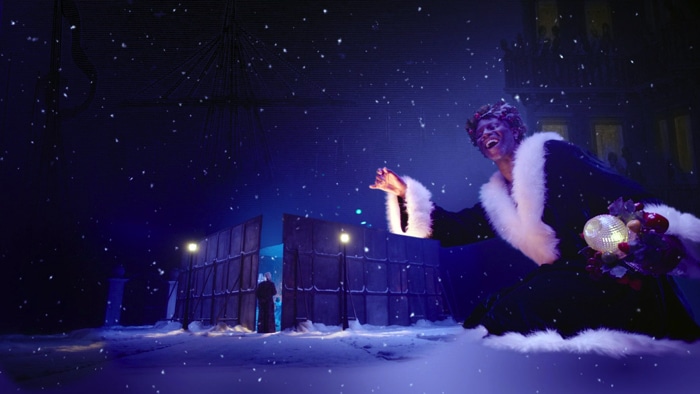 Carey Mulligan, Leslie Caron and Simon Russell Beale are the stars of this radical new retelling of the Christmas mystery that blends animation, dance, theatre and film into a dazzling fantasy reimagining that touches on the social realist aspects of deprivation and depravity along with the magical power of redemption that brings light to Charles Dickens’ Victorian classic A Christmas Carol with its best known characters Scrooge and Tiny Tim.

This satire on capitalism play within a film begins in the dark days leading up to an 1860s Christmas when a large Victorian family is preparing for their annual home performance with a selection of toys and a cardboard stage. As Grandma (Sian Phillips) begins to read the show takes off, each character performed by an actor who also dances. Russell Beale is Mr Scrooge has a young and old embodiment, Daniel Kaluuya is the voice of Mikey Boateng’s all dancing Ghost of Christmas. Despite the dour social commentary it couldn’t be more glitzy and that’s why it feels like the perfect cheer to bring this dreadful year to a close. MT