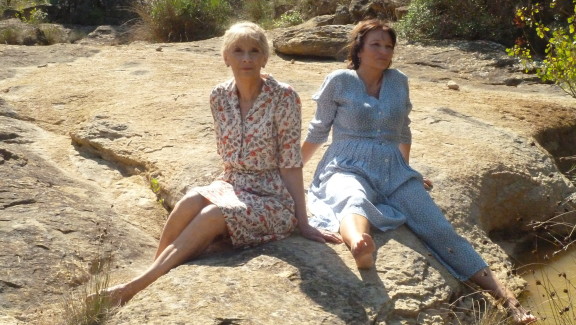 Jon Sanders (Back to the Garden) gets to grips with the meaning of love for a close-knit group of luvvies in this low-budget indie set deep in Cathar country, in the mountains of South West France.

Usin WH Auden’s quote “Will it come like a change in the weather…O tell me the truth about love” as a starting point ageing theatre director Dan (Goody), insecure about his feelings, invites a cast of three actresses to discuss their relationships with him: there is Jo (Garden), his real life wife; Lydia (Mottram) who is supposed to play his wife age forty-eight; and Kalle (Becker) who represents his wife age twenty-one, a year before they married.

Family members of Dan and Jo also play small parts, but the action centres around Dan and his three ‘wives’. When Jo wants the discussion to focus on marriage, it becomes clear that she is not amused by the proceedings. She is edgy, and cuts off after questions about birthday presents. Kalle is somehow written out during the process, whilst Lydia (Mottram, co-writer with the director) prefers to toy with the subject, like Dan’s puppet. When life and play-acting eventually converge, the exercise feels rather predictable.

Interactions between theatre and life are quiet common in feature films, most notable the great Jaques Rivette (Noli Me tangere, La Bande des Quatre) has excelled in this subject. But Sanders lacks discipline and structure to succeed, A Change is simply too tepid and spineless, and apart from the ending: its all rather too acquiescent, with everyone delivering their monologues. DoP David Scott, long time collaborator of Sanders, fits in with simple, but uninspiring images. Whilst Back to the Garden had some underlying tension to give it some dramatic heft, this project is still-born from the start because, apart from Dan and Jo, the other character have no axe to grind with each other. One can somehow imagine what Sanders had in mind, but the end result is bland and uninspiring. AS