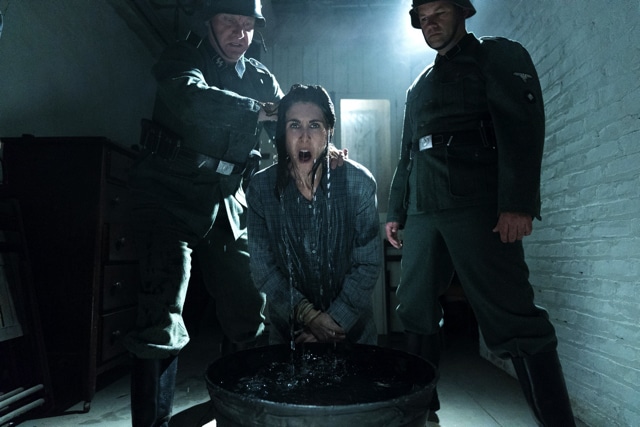 US director Dean Pilcher lifts the lid on a little known Americanised account of World War II history about a group of women recruited by Churchill’s Special Operations Executive a “club unlike any other”. The proviso was that they should know all about France, be passionately against Hitler, and pretty.  The film is coincides with this year’s 75 anniversary of the D Day Landings.

Slick, affecting and brilliantly acted this impressive feature never takes itself too seriously thanks to Megan Thomas’ zesty script (she also produces and plays one of the spies) and the film has that distinctive look of TV zipping along at a brisk pace in establishing how the women were recruited and the stumbling blocks they will encounter professionally and personally in the field.

Stana Katic is a chic, no-nonsense Vera Atkins, a Romanian Jew whose accent occasionally lets her down, but she is keen for promotion and in charge of the recruitment drive as secretary to the head of the French section of the SOE (Roache). Keen for promotion, she begins the recruitment drive in the lush countryside of occupied France selecting Noor Inayat Khan (Apte) a French Sufi Muslim, and Virginia Hall (Megan Thomas). All are experiencing the discrimination of British society at the time: Virginia has lost part of her leg in a hunting accident; Noor has been held back by racism, along with her religion’s pacifist credo. But she is a talented wireless operator and her winning personality will clearly be an asset.

The multi-stranded plot is often bewildering as it wears on – there are too many unanswered questions – although this flaw could easily be attributed to inexperience, and the inherent confusion that prevailed during wartime. Strong performances carry the feature through, particularly that of Apte as Noor. Set on the widescreen and in intimate close-up, Baumgartner and Goodall’s atmospheric camerawork evokes the claustrophobia of their secret situation and the perilous, frenzied atmosphere of the covert operations.

The stakes are high and the constant sense danger is ever present as the women soldier on coping not only with the fear of detection and capture from the enemy, but also making quick decisions that affect their lives – not just their jobs – and the frequent errors of judgement made by their male counterparts back at base. And not all will survive to tell their tale.

Enjoyable and passionate A Call to Spy is also confusing at times and may have worked better as a TV series allowing the characters to expand into real people with rounded lives not women just caught up in a difficult war. The women were courageous heroes in the true sense of the word, and will be an inspiration to many who think that success is just about celebrity. MT