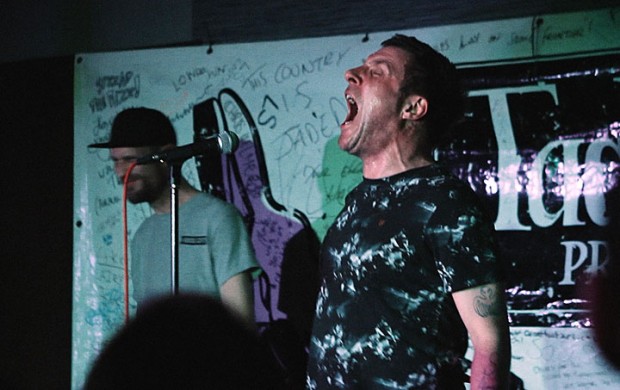 BUNCH OF KUNST accurately reflects the mindset of the Sleaford Mods, a couple of angry individuals who turn their feelings into sweary music. Whilst lacking the acerbic humour of Ian Dury, the Sex Pistols or The Clash the band gladdens the hearts of a fervent fan base with an axe to grind in modern Britain. They also stand out as a cry for help amid the saccharine hurling of so many of today’s British vocalists: at least the Mods are unaffectedly genuine in their vitriol, captured so candidly here by new German director Christine Franz.

There is clearly no animosity between the duo themselves who share a warm and mutually respectful friendship: writer Jason Williamson and computer ‘beat man’ Andrew Fearn call themselves “the voice of Britain” but continue a long tradition of fury that brings nothing particularly new to a party that’s been rocking on since the 1980s Punk era.

Franz follows the band from their genesis in a Nottingham bedroom to chart success – a journey that has taken two years and now sees them performing to fervent wide-eyed fans whose lives they seemingly reflect in livid lyrics. The long-forgotten towns and dreary backwaters epitomised by Morrissey are here again and chiming with a new generation of disenfranchised followers. Daniel Waldhecker visuals capture the heady waywardness of it all on stage and behind the scenes. This strong and evocative debut for Christine Franz will certainly delight fans. MT