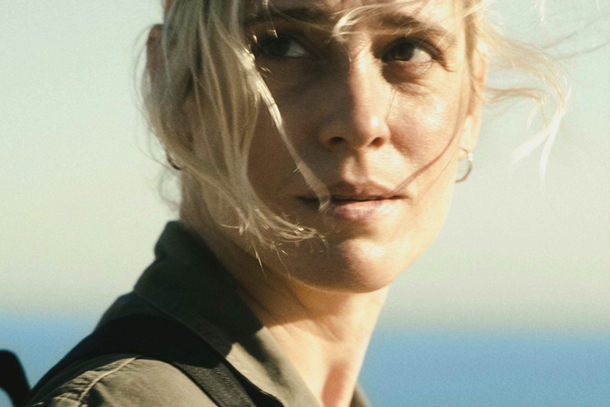 For Maria (Aggeliki Papoulia), the driving force of Syllas Tzoumerkas’ second feature A BLAST, the grass is suddenly greener. It wasn’t always so, needless to say, but from the opening moments of this slippery drama the happily married mother of three is in flight from life as she has known it, having left her children and a case of money with sister Gogo (Maria Filini) and driven off into the night—some time after cruelly exiling her burdensome, widowed father to an area of coastal forest. The film world-premieres this week as part of the 67th Locarno Film Festival’s International Competition.

Through flashbacks—and flashbacks within flashbacks—we’re gradually brought to speed: Maria is one of two feisty daughters of convenience store-owning parents who one day meets and falls in love with Yannis (Vassilis Doganis), a sailor whose sexual prowess is tempered by insufferably long bouts at sea. Discovering one day that her wheelchair-bound mother hasn’t been paying her taxes, Maria takes it upon herself to sort matters out. Along the way, she apparently grows detached from things, and begins attending meetings of an ecological activist group as well as group therapy sessions for victims of domestic abuse. She may or may not be hatching a moneymaking plan.

Pasts and present mix. Juxtaposing these timelines lends the dramatic stakes a mystery, recalling the causal disconnect of Alejandro González Iñárritu’s 21 GRAMS (2003). A BLAST also evokes González Iñárritu in other, more irksome ways, such as the nagging suspicion that it’s structure in bad faith—that it’s overstuffed in order to disguise the ridiculous melodrama beneath. Though 21 GRAMS has a thematic justification behind its patchwork storytelling, questions remained: what would happen when González Iñarritu, a director with an apparent preference for soap-like melodrama, finally braved linear storytelling? BIUTIFUL (2010) happened: a film of such po-faced poetic severity that its miserable drama began to feel like a piss-take.

Perhaps aware of this, Tzoumerkas and co-scripter Youla Boudali opted to tell their tale of high passion—and its consequences—in such a way that you barely have a moment to figure out its purpose. Tonally, the musical score suggests it’s a thriller. Editorially, it’s a mystery. Imagistically, something more ominous is at work, such as when a car pulls up alongside Maria, or when Yannis is seen in his cabin with a sweaty roommate bearing a flick-knife. It’s absorbing to a degree, of course, but when Maria’s monologue to her group therapy class is juxtaposed with her mother struggling out of her wheelchair, things appear off. The out-of-focus long shot in which the latter character crawls into the bathroom to commit suicide is telling of the director’s misguided pretensions: there’s simply no reason for it to be framed or lensed in the way it is. Other choices, such as juxtaposing passionate flashback sex scenes with Maria searching for and unashamedly watching “porn sex videos” on a public computer, are baffling.

Throughout, Tzoumerkas relies on a number of shorthand devices, which range from the merely clichéd to the mildly offensive. From the former category: Maria’s insufferably ear-splitting screams of delight upon being reunited with Yannis; Maria slapping Yannis in uncontrollable fury when he departs for another sail; over-lit handheld to invoke Maria’s happier past; Maria and Gogo talking over one another with ironically foul language to denote their chemistry and hearts-on-sleeves emotionalism. Two moments in particular appear to be offensive; both involve Yannis. The first is in a brothel, wherein he has sex with a black prostitute, and the second is a deliberately abrupt cut to him having sex with a male colleague.

Though I won’t argue too much against anyone who defends the second instance as an acknowledgement of a sailor’s sexual needs while at sea (stereotypical as that may be), there’s something very wink-wink and SHAME-like in the way the film splices it in, with something resembling a shock-cut: what better way to connote a heterosexual man’s physical needs than by showing him having sex with another fella? The first instance remains objectionable, meanwhile, because one can’t help but think of Tzoumerkas and Boudali making their only black character a professional seductress in a tastelessly puce den of adulterous iniquity—that they deliberately opted for a black prostitute because a white blonde woman like Maria wouldn’t be unacceptable enough. MICHAEL PATTISON