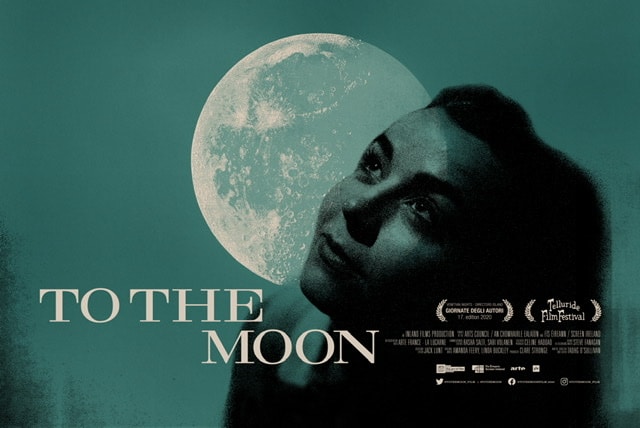 This first solo outing for writer/director and editor Tadgh O’Sullivan is a hymn to the moon compiled of countless clips and texts from over 130 films featuring the lunar planet. Like most compendium films To the Moon stimulates the desire to revisit the originals – mostly Nordic and German films –  not just as quotes – but in their entirety.

This moon admiration marathon is divided in sections with the first three entitled: ‘Because the Moon feels loved‘; ‘Because its always alone in the Sky‘ and ‘Loom of the Moon‘. The goddess of the Moon is apparently called Luna, yet ironically the word has now come to be connected with the mentally challenged here on Earth (lunatics).

The next chapter, ‘The Werewolf’, explores intruders into the home after the hours of darkness, and particularly those of a canine variety. ‘Ebb Tide has come to me’ is a melancholic segment dealing with ageing and featuring as its themes water and death in the moon shine: “Winter of age which overwhelms everyone”.

‘Part of a Dream’ looks at children’s relationship with the moon and we watch, among others, a clip of Edgar Reitz’ Heimat, where the young narrator asks himself “Is it the same Moon over Russia as over Schabbach?”

A little boy asks a father if he is part of the moonlight dream in ‘The Moon is Ours‘ and we enjoy a clip from Fritz Lang’s horror outing The Thousand Eyes of Dr. Mabuse (1960). Meanwhile a very unromantic Italian man drives his knife into a tree, destroying a heart carved into the trunk, his female companion looking hopefully up to the gleaming planet. Finally, ‘Earth Fragment‘ brings us back to the cruelty of nature, an owl is attacking a rabbit in the moonlight.

Three years in the making To The Moon is a labour of love, O’Sullivan has certainly done his homework, but one wonders how much is really to his credit. Impressively edited and entertaining To the Moon is an enjoyable foray into the film archives testing the audience’s knowledge of film history AS

UK films featured in To The Moon:

– The Smashing Bird I Used to Know (Robert Hartford-Davis, 1969)