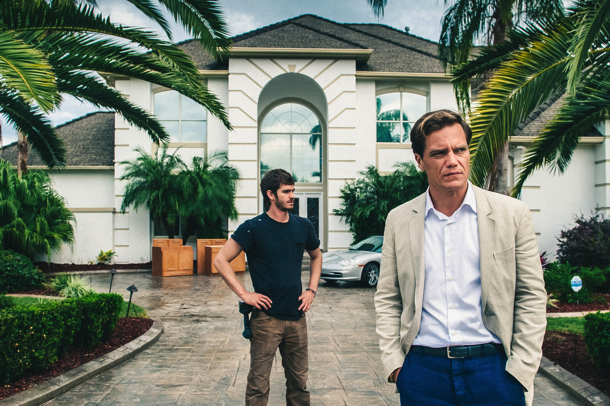 In Ramin Bahrani’s gripping sub-prime thriller, we meet Dennis Nash (Garfield) for the first time in court, where he fights an eviction order. He lives with his mother Lynn (Dern) and son in a bungalow in Florida. Next day, the property “developer” Rick Carver (a brilliantly glib Michael Shannon) arrives to evict him with local sheriffs. The family has two minutes to pack their belongings – the furniture is dumped on the front lawn – Nash has 24 hours to remove them, before all will be trashed. Tearful farewells from the neighbours are followed by a move into a shabby motel. But Carver is not finished with Nash, he has done his homework: both men come from working class background, only Carver chose a career to sell houses, unlike Nash, who has worked on building sites, before his employers went bankrupt.

Carver offers Nash a way out: a job. First Dennis does the manual jobs for the ever increasing evictions, than Nash starts to be an enforcer like Carver. The money rolls in, and Nash is about to buy his house back, when a chance encounter with one the families he has evicted, lets Nash’ family into the secret he tried to hide from them. When Lynn takes his son away to her brother, Dennis has to make a decision.

In a contempo Faustian’ bargain: the devil (Carver) offers Nash the existence he would have had in the motel. Initially, Nash is only after getting his house back, than he is stung by the ever increasing profits as he becomes the devil’s apprentice. Step for step he looses his decency, represses the guilt with the excuse that he only does it for his family. He could be any of us. The mortgage crisis in the USA cost too many families their homes, families who paid their mortgages on time – as long as they could. But nobody is save from this fate, everyone is just a step away from this catastrophy.

This is a middle-class nightmare with some outstanding turns from three actors at the top of their game: Shannon is undestated, not painted as a bad person, just one who made the wrong decision. Garfied stumbles into the abyss, always looking over his shoulder to his former self. Dern is the sensitive but film matriarch: staying with her roots, unfazed by the opportunities her son might conjure up. The camera remains un-judgemental, showing the wealth and the poverty, neutral, like a true. 99 HOMES is a frightening film, because it could be all our tomorrows. AS