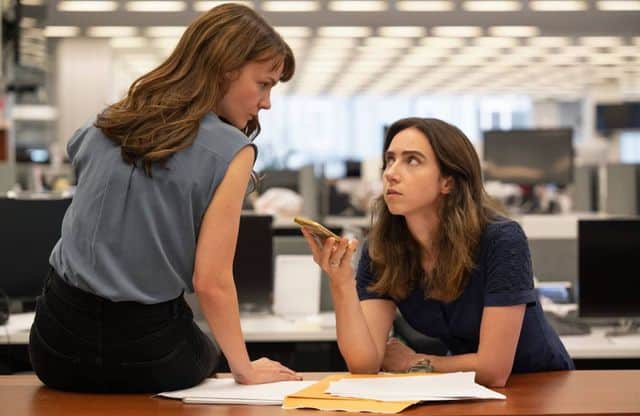 Maria Shrader’s worthy trudge through the Weinstein saga sees women tearing up at the slightest provocation – even those who never met him – but there’s one consolation: Carey Mulligan.

She plays Megan Twohey, one of a pair of New York Times journalists, along with Joe Kazan’s Jodi Kantor, who wrote a harrowing Pulitzer Prize-winning expose of the prolific sexual crimes committed by Hollywood mega-mogul Harvey Weinstein back in 2017, when the scandal finally broke.

The City of London was my domain for nearly fourteen years, and so no stranger to sexual shenanigans on the trading floor. I was once asked to keep a Norwegian shipping magnate ‘happy’ after a night out with fellow brokers. Naturally I froze in anger and disbelief back in the day as a twenty something graduate used to more respectful behaviour from the opposite sex. But hey – you faced up to them, or moved on, or got over it. It was very much the territory for working women in a man’s world, particularly attractive ones.

Nowadays we have the #MeToo brigade who – quite rightly – objected to their big bosses’ beastly behaviour. Not just a slap and a tickle but hard core sex. One of them, Rowena Chiu (Yeoh), complains Weinstein asked for ‘just one thrust’. The whole idea is faintly ridiculous.

She Said is sober, well-acted but terribly dull because we know what’s going to happen as the torpid narrative, adapted by Rebecca Lenkiewicz, trundles along solemnly with the two tracking down rumours and substantiating the umpteen financial settlements that allowed Weinstein to avoid legal proceedings in preying on actresses and assistants for decades. Nearly 90 people would eventually agree to share their stories about Weinstein – who we never see – although we do hear his stentorious voice during a telephone call. The women affected included Gwyneth Paltrow, Angelina Jolie, and Ashley Judd (who plays herself).

The reporters work would also spawn a book: She Said. And that literary tome provides the basis for this earnest but bland account of the take-down of the most powerful man in the movies who is now serving a 23-year sentence for rape and sexual assault.

Mulligan saves the day as a pre-possessed and powerful reporter, softened by motherhood, but still ‘having none of it’; Kazan’s Jodi feels she’d be more at home running a knitting class, but her sympathetic face seems to do the trick in getting the information out of run-down mothers and film execs who were clearly devastated by their casting couch experiences. The rest of the cast is supportive: Samantha Morton’s Zelda Perkins stands out as the most grounded, philosophical and convincing victim, Patricia Clarkson is solid and reliable as the NYT editor who guided some of the era’s most seismic investigations. Shame then that the real villain of the piece is nowhere to be seen. Who would play him? MT