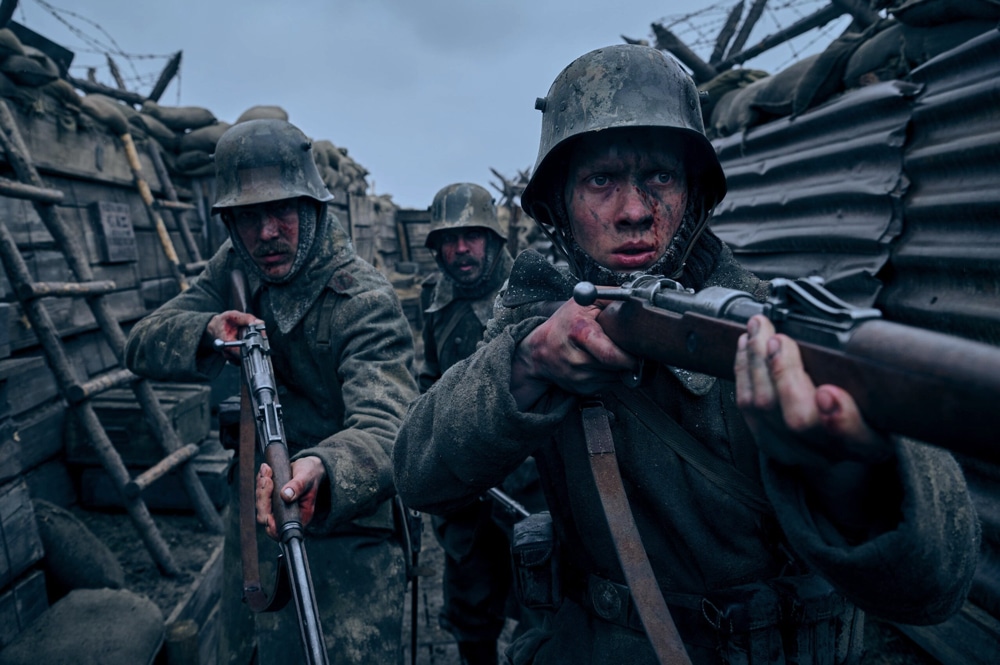 A century after the ‘Great War’ (1914-18) took its toll on 17 million lives,  Erich Maria Remarque’s classic German language novel ‘All Quiet on the Western Front’ finally comes to the big screen in this elegant arthouse adaption from Edward Berger (Jack). Previous Hollywood versions pale into insignificance alongside this passionate and quietly devastating epic, seen from the unique perspective of a German soldier.

Like many teenagers throughout Europe Paul (Felix Kammerer) is thrilled at the chance for adventure and joins the ‘glorious’ war effort along with his school-friends after a rousing call to arms. Little did they know the fate that awaited them.

The war was well under way when the chums Müller (Moritz Klaus), Kropp (Aaron Hilmer), Tjaden (Edin Hasanović) and the slightly older professional soldier Katczinsky  or “Kat” – (Albrecht Schuch) finally arrive at the front expecting an exciting run of it before finally marching to victory as German heroes. Just like the Allied forces of Tommies and ‘Poilus’ were hoping for on the other side.

Berger and his co-writer stay reasonably close to the original telling their harrowing story in a thrilling and lyrical anti-war action drama that captures the spirit of English war poet Wilfred Owen’s famous ‘Strange Meeting’ without ever stinting on the brutal reality of tday-to-day violence and terrible bloodshed. Some mean feat. And yet the film remains compulsive for well over two hours.

Paul and his fresh-faced comrades at arms spend their days lurching from the screaming horrors of trench warfare to the hysterical joy of ‘downtime’ when they steal a goose and roast it, or catch sight of some nubile French girls in a distant meadow. Experiences that see them desperately longing to be back home, away from the nightmare that is their daily reality, and one that foreshadows a doomed future made all the more poignant because only we know the truth.

Rather than confusing us with complex military strategics, Berger fills his film with the mundane yet fascinating detail of the wartime experience: blood-soaked uniforms of the dead are routinely collected from the battlefield and washed in steaming vats before being recycled on to the next eager soldier, name tags of the dead still attached; a body hangs naked and legless from a tree, its uniform blown off by the sheer force of a shell; intimate letters are read aloud revealing an unspeakable tragedy from back home.

Meanwhile German officers enjoy opera music while they dine in splendour, or munch on crisp croissants in a railway carriage at Compiègne begging the French for an armistice through their learned politician Matthias Erztberger (Daniel Bruhl). But Thibault de Montalembert’s Marshal Foch says, decidedly: “Non”.

After the truce is eventually signed – without compromise – a German general informs his emotionally broken troops – only Paul is still fighting – that they have one last chance to save the nation’s honour before the war officially ends at the 11 hour of the 11th day (November 1918). For once, a literary adaption worthy of the original. MT

All Quiet on the Western Front | 14 October in cinemas, 28 October on Netflix.