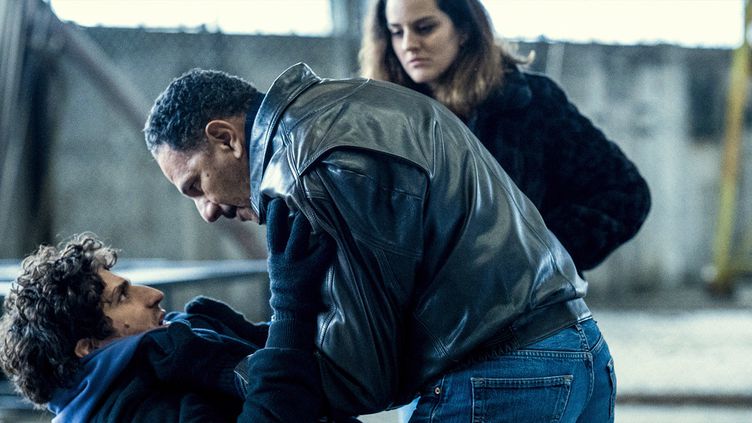 At a loose end emotionally after his wife dies a young man becomes obsessed with his mother’s new lover who has just come out of prison.

The Innocent is Garrel’s most enjoyable outing since turning director. It takes a frivolous idea and spins it into a witty and soulful story that also works as a love letter to Lyon and its gourmet reputation and an homage to the French comedy capers of the sixties with noirish undertones primped by a lively original score from prolific composer Gregoire Hetzel (Incendies) and underpinned by a starry cast of Noemie Merlant, Roschdy Zem and Garrel himself.

Abel (Garrel) certainly has mixed emotions about Michel (Roschdy Zem), convinced that his mum Sylvie (Anouk Grinberg) will end up a victim – again – when her new lover returns to his life of crime, although the couple’s marriage certainly seems like a bed of roses. And when they start a new floristry business in Lyon’s trendy Corbas district, Abel, who works in the local aquarium, is appalled to hear them having raunchy sex in the stockroom. Sylvie’s romance reminds him how much he misses his own lost love and he is driven to tears laying flowers on her grave in the shadow of Lyon’s famous Notre Dame de Fourviere, a scene that gives the film its tender touch of melancholy. . But Abel certainly has mixed emotions about Michel – and some of them are downright hostile. So with his spunky new girlfriend Clemence (Merlant) Abel hatches a mischievous plan to spy on Michel at work, and this neurotic quest to dig the dirt on his father in law provides the film with its rich vein of humour. But Michel is no fool and calls their bluff with embarrassing results as we start to wonder whether he really is a reformed character.

But, true to form, Michel is soon back to his old tricks while fronting as a delivery guy for the furniture shop ‘Conforama’. Abel soon finds himself inveigled into the robbery involving caviar as the movie moves into heist mode, with Clemence saving the day. Garrel skilfully navigates the tonal shifts between comedy crime caper and soulful romcom in a film that ends with mixed emotions of a different kind as the romantic tables are turned. MT