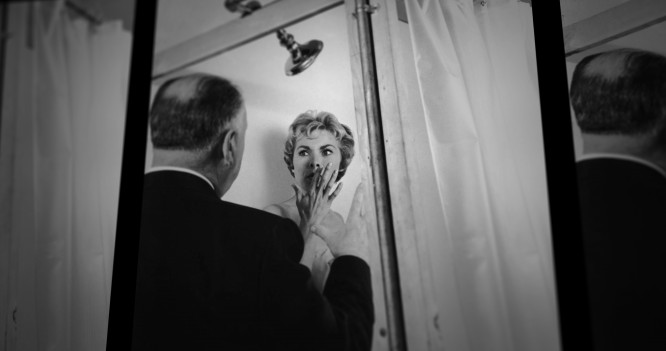 The title of Alexandre O Philippe’s documentary refers to the technical way of shooting the shower scene in Hitchcock’s horror classic Psycho: 78 camera setups and 52 cuts. It was the most exacting and difficult scene to shoot during November 1959. Psycho also represented the first physical attack against a naked woman on film, and in the privacy and sanctity of her bathroom – and the first image of a flushing toilet. Psycho is now considered a watershed in film history, ushering in an era of fear and uncertainty after the calm and orderliness of postwar positivity.

Hitchcock claims that he made the film in black and white because the flushing away of the blood in the shower would have been too shocking, although the torn shower curtain idea had already been seen before in Cecil B. DeMille’s The Ten Commandments (1923) . Peter Bogdanovich, who attended the very first press screening of Psycho in New York’s Times Square, makes the most salient point: “Women were top billing during the ’30s and ’20s and that gradually evaporated during the ’40s and ’50s when they slipped into second place, and that’s what the movie’s saying – it’s about killing off the woman”.

What follows is a dissection and debate – mostly by men – about the ground-breaking film, and its terrifying scene that seems to represent a culmination of all Hitchcock’s work up to this date, with the likes of American cinema luminaries such as Walter Murch, David Thomson, Eli Roth, Peter Bogdanovich and Bret Easton Ellis who all share their thoughts on the moments and motivations of Psycho. There is also comment on Gus Van Sant’s panned 1998 remake. A great deal of what is said is salient and apposite, but there’s also a large amount of pointless detail and waffle set to an ultimately annoying and redundant, violin score (nothing like Bernard Hermann’s masterpiece original) that thankfully fades out when we get to watch the scene clips,with commentary from Hitchcock himself, who puts the whole idea down to voyeurism; also claiming that Psycho was not serious and questioning why people found it so shocking. Those who enjoyed Hitchcock Truffaut (2015) will probably feel that most of the ground has already been covered in that superior documentary.

What the film does engage with – and that’s fascinating – is the role, positive and negative, of the mother figure in American Society since the 1950s, and how ultimately women have had the easy option of home-making and child-rearing, but also seducing and withholding (sexually) and therefore were due to be punished. And here Hitchcock admits, laughingly, that his mother scared him as a young boy and that’s putatively why he grew up to be sexually repressed with the need to punish womankind. This revelation could then have segued into a debate about the reportedly negative experiences had by Tippi Hedren, Grace Kelly or even Kim Novak while working for the director. So an exploration of Hitchcock’s suppressed sexuality that spawned the film could have been really intriguing but that’s clearly another documentary. 78/52 has weight and integrity and is certainly worth a watch. MT