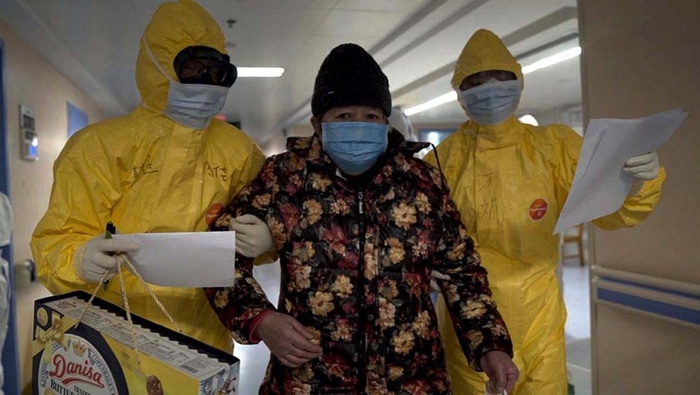 Not as hard-hitting as you would imagine, and in some ways faintly amusing given the repercussions that would follow, this cinema vérité snapshot of the first COVID outbreak takes us back to Wuhan, China where it all began, the rest of the world still blissfully unaware and innocently going about its business.

In a Wuhan hospital a woman cries out in anguish as the body of her father is hurriedly sealed in orange plastic by a group of hazmat-suited medics who then hurtle back through the corridors to deliver the toxic bundle into a waiting black van.

Towering skyscrapers dwarf a twinkling ambulance racing over the massive bridge that straddles the vast Yangtze river (think Golden Gate without the glamour), as the city is plunged into a hush-hush yet draconian lockdown, marshalled citizens falling into rank as they meekly obey the eerie tanoyed announcements to ‘stay in their homes’.

Wuhan is a major industrial city in Hubei province, Eastern China, but the scale of the crisis in the four hospitals where the doc was filmed, by director Hao Wu (People’s Republic of Desire) and reporter Weixi Chen, takes on an intimate yet respectfully buttoned-down detached community atmosphere. You never see a medic’s face, such is level of PPE, yet the (mostly old) patients stay wrapped in their own colourful padded jackets as they are tucked up in bed and told to sleep – almost like kids – and referred to as ‘grandma, and grandpa; the middle-aged sufferers; aunty and uncle.

Although the grief and panic is feverishly palpable there is a ordered and kindly feel to proceedings as patients’ personal possessions – in China that means mobile phones – are wiped down with alcohol and placed in plastic bags. There is no triage system here: this is a close up and personal system where the medics themselves deal face to face with the oncoming stream of stricken public who rattle the door handles of hospital’s modest entrance, demanding to be seen first: “Any vomiting or diarrhoea?, Okay – let him go first, he’s limping” says the matron.

The documentary began shortly after the January 23rd lockdown in Wuhan, the filmmakers maintaining a strictly observational eye on the unfolding crisis. There are moments of dark humour surrounding an old fisherman – the doc’s main protagonist – who has found his way into the system and can’t seem to find his way out, although he appears to be suffering from dementia rather than Covid, judging from his candid take on events. The doctors keep forcing him back into his room, telling him to wear his mask ‘properly’: “What a way to treat a person” he laments fractiously. Later he has decided to stay: “Not bad – free food and medicine here, where I come from is so backward”.

Apparently the shoot inside public hospital facilities wasn’t government-sanctioned. Hao was researching a project for an American network, who then abandoned the story when Covid went global, but he continued his own filming using  reporter Chen (and his colleague chose to remain anonymous). They have created this raw and immediate take on an outbreak that purportedly originated in Wuhan’s wet markets in the vicinity of the hospitals, and would result in the death of millions worldwide – not to mention the economic, social and political repercussions.

No doubt there will soon be a ‘Covid’ genre – we have already seen a Belgian outing: I Am Not a Hero and Alex Gibney’s Totally Under Control, and there are more to come. The filmmakers formally requested that none of the hospital staff be mentioned or identified “to avoid any potential government interference with the film”. The only possible clues to their identity are available in the delightful drawings that were sketched in marker pen on the medics’ PPE gowns, and they possibly included their names (if you can read Mandarin).

In early April 2020, 76 days after the crisis erupted the Wuhan lockdown is lifted, and air raid sirens mark a gloomy tribute to the dead, masked citizens stopping to pay their respects in the streets, where some are visibly moved to tears. Their government clearly didn’t have the same respect for the World’s wider community in their bid to play down the crisis. But amongst these locals a strong sense of civil cooperation and commitment to a common cause is admirable and poignant. MT