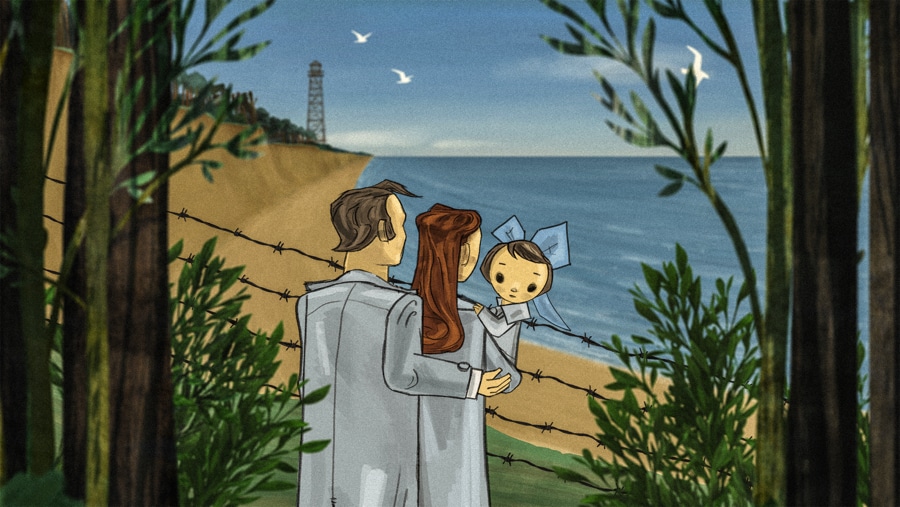 Latvian director/writer Ilze Burkowska-Jacobsen tells the story of her childhood growing up under Soviet occupation. What shines through is her romantic yearning for the countryside in a self-censored biopic enlivened by delicately drawn animations, interviews and documentary footage.

Young Ilza tells her story of dislocation and dual alliances (voiced by Mare Eihe): growing up in the ancient town of Saldus in Courland where her father was an active propagandist of Soviet values – dying in a car accident when Ilze was seven. Her mother was much more critical of the State, but toed the party line – even joining – to help her daughter advance to university and study Journalism, as her father had done before her.

Meanwhile Ilze’s grandfather, deported to Siberia for opposing the collectivisation in 1930s, was fearful of his granddaughter turning to communism, sending her to play outside while he was listening to a banned Western Radio Station. Ilze was unaware of what was going on still fervently believing in the founder of the Soviet State, Lenin: who hands her an ice cream while she is out for a drive with her parents. Later on she returns home empty-handed after waiting to buy butter, because a veteran of WWII has snaffled the last pack, not needing to queue.

At a meeting of the Soviet Youth organisation “Young Pioneers”, Ilze meets her life-long best friend Ilga who tells her to pull up her socks so as not to spoil the picture of uniformity. There is WWII footage about the Cauldron of Courland, and Ilze and her schoolfriends are literally forced to worship a certain Jacobs Kunders, who scarified himself in battle to save his comrades.

Ilze does everything to get a place at university; and thanks to her efforts she is invited to the most prestigious “Pioneer” camp on the Crimea. Towards the end of the Soviet Union it emerges that Ilze and others were forced to take up shooting lessons in honour of the war heroes adorning the school walls. The class acted in solidarity, unanimously asking to be relieved from the gun exercise. Instead they are assigned to a First Aid course, and this successful class action make a great impact on Ilze.

There are some odd sequences: a Nazi soldier, buried in a mass grave, is seen on the wall of a block of flats under construction, the neighbours taking it as a sign from God and a bad omen that construction is doomed. Another animation shows a WWII Nazi plane flying from Latvia to Berlin with its cargo of cows falling out in mid-air.

And although Ilze stays true to the Soviet cause in secondary school, Ilga becomes increasingly sceptical and this questioning attitude shows up in her final essay which is rejected due to its questioning Soviet norms. Ilga, who is seen often with Ilze in the few life interviews, felt so suicidal after her rejection she nearly killed herself. But Ilze’s mother leaves for the countryside to run her own farm, opting out of a system she does not believe in and could endanger her daughter’s future (My Mother’s Farm).

Somehow, My favourite War is two films in one: the most interesting being Ilze’s stance in acquiescing to the Status Quo, and here the animation sequences are often hilarious. Then there is Ilze second-guessing herself, and drifting off into a very uncritical Latvian history lesson. These two halves don’t make for successful whole, the adult Ilze is much less interesting than her contradictory young self. AS

MY FAVOURITE WAR IS AVAILABLE ONLINE