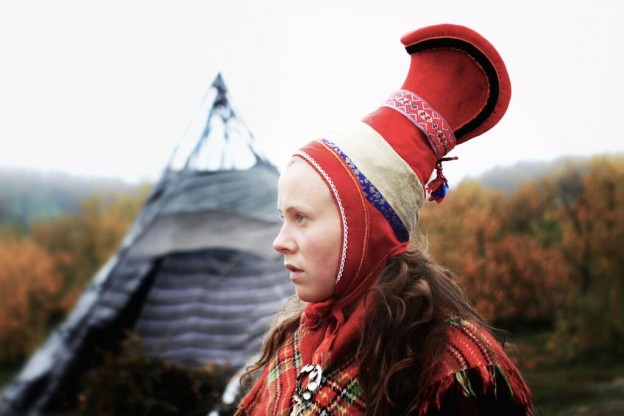 Seven young Sami directors, representing the culture of Lapland, directed the same film team in the Norwegian village of Kautokeino. Their short films all share an eerie quality, something not seen before. One might not identify this quality immediately, but all films have in common a spiritual awareness, a deep-seated reference to the past, unspoken enigmas and a dreamlike aspect. Featuring nightmares or poetic, lyrical day-dreams: seven very unique examples of a marginalised culture being very much alive.

SAMI BOGA, directed by Elle Sofe Henriksen, is the story of Mikkel, a teenage boy, who has the responsibility for he reindeer herd of his family, but whilst he is able to look after the animals, he has the most violent nightmares in his head. The snow driven landscape is more than a background: this young man is possessed by demons, possible from the past, and he is unable to distinguish between reality and his visions.

O.M.G. –OH, MAIGON GIRL by Marja Bal Nango features to bored teenage girls, Maigon and Anne-Sire, who attempt to go to a party in Sweden, but in the end walk home frustrated, after the young men they want to travel with, have turned out either violent or disinterested. Drinking Vademecum, an oral health care product, with a minimal alcoholic content, they fall out with each other, with the boys and with the whole world. They teeter at the brink of being victims of male violence and at the end, one is only too happy for them, when they walk home together: just not ready for the world they dream of. An often flippant, but very serious portrait of the pains of growing up.

LONG LIVE SAPMI directed by Per Josef Idivuoma is a slapstick comedy, which has its roots in ancient Sami history. Klemet is the hero, who fights foreigners, trying to occupy his country. But soon his attention is not so much focused on the foundation of the first Sami parliament, but a young woman, with whom he has wild sex in his tent. Always over-the-top, Long live Sapmi is a wild take on Sami independence and the importance of a good love life.

Majjen, the heroine in BURNING SUN by Elle Marja Eira, is wearing a special hat, a traditional Sami outfit, like all women in her village. But the Christian missionaries forbid the women to wear these particular hat, because it’s form reminds them of the horns of the devil. Up and down the country, the women are chased, and Majjen is warned by a woman firend to be careful. Nevertheless, she falls in the hands of the missionaries, and is taken away by boat. After a struggle, she chooses to drown, rather than give up her hat. With beautiful underwater image, Burning Sun, is a dark poetic parable, which portraits the fight for identity of the Sami women.

EDITH & ALJOSJA are the main protagonists in Ann Holmgren’s (happy) variation on Tristan and Isolde. The two live in different worlds: Edith in an old fashioned Sami tent, Aljosja in a modern house.They are separated by a river, the man seems able to walk on the water. But the woman has to swim trough the dangerous current, nearly drowning, before she reach Aljosha. This is a beautifully shot allegory on love conquering different cultural backgrounds, with a white halo settling at the end on the house of united couple.

AILE AND GRANDMOTHER by Silja Somby, is told like a fable story: Aile, a young girl has her first period, and is asked by her grandmother, why she did not tell her mother. But Aile is much closer to the old woman than her ‘modern’ mother. The grandmother, who cures illnesses with herbal remedies, talks about giving Aile her healing powers. When Aile finds her dead, she runs to her mother, who does not believe her, since the grandmother passed away long ago, when Aile was a baby. Simple, but not simplistic, Somby shows in a lyrical way, how traditions are passed on – even from the dead to the living.

THE AFFLCITED ANIMAL, directed by Egil Petersen is the most impressive contribution. It is the portrait of a dysfunctional family: Leif, the father, tries to deny the mental illness if his wife Agnes, who stays unresponsive in bed, whilst their young daughter Ida is very much aware of the fact that Leif wants a way out. When one of their dogs gets ill, Ida phones Eva, the vet, who has been Leif’s girl friend before he met Agnes. Seeing Eva, Leif wants to see her again the same evening, and lies to his daughter, but she is not fooled, with whom Leif is going to spend his evening with. Ida is a very delicate child: she sees her father searching for a way out, wanting him to stay on the one hand, but another part of her wants him to be happy with Eva. A dark, very complex relationship story, centred around a young girl whose desires split her in two. AS