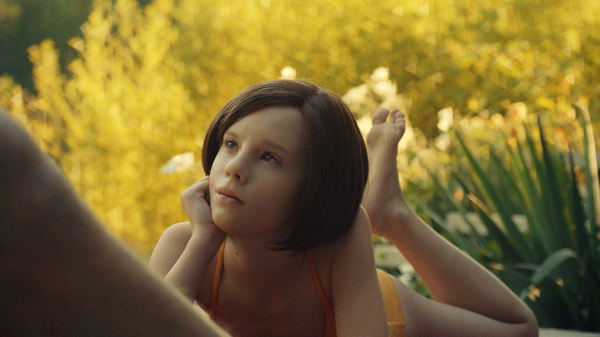 Women filmmakers are intrigued by Sci-fi and futuristic films at the moment. Claire Denis and Alice Winocour explore Space travel in their films High Life and Proxima. Carol Morley looks into black holes in Out of the Blue and Lucile Hadzihalilovic and Jessica Hausner have scoped out marine regeneration (Evolution) and plant development (Little Joe).

Meanwhile, Austrian filmmaker Sandra Woollner explores the future through our preoccupations with loneliness, guilt and loss. Her sinister second feature imagines a future with robot companions in the suburbs of Vienna where the main character, ten-year-old Elli, lives with a man she calls “Daddy”. But the two seem rather too close for comfort and there is also something strangely sexual about their relationship.

In balmy evenings by the swimming pool Elli plays with her so-called father (Warta). He has programmed her to say all the right things, in a parody of romantic love (there  is nothing smutty here). He also takes her to bed. And although the words mean nothing to the android, she says them with glazed conviction. It’s an unsettling performance from the under-age newcomer Lena Watson (accompanied during the shoot by her parents who were on board with the process). And we soon realise Elli is not real, she is simply her owner’s answer to the perfect partner.

Things have really moved on since blow-up dolls, but the few nude scenes here were all created via VFX with the young actress wearing a special suit suit and a silicone mask and wig which help conceal her real identity and her likeness to another character who will appear later in the film. One evening man and ‘daughter’ become separated while rambling around in the nearby woods and Elli stumbles onto the highway where she is picked up by strangers.

Ensconced in slightly less glamorous surroundings, Elli assumes a new identity, a new ghostly existence linked this time to a child who disappeared and was never seen again. Once again the humans project their longings for their dead loved ones, and the lost paradise of their childhood. But this time the narrative is more unsettling, melding reality with fantasy in a way that discombobulates the survivors as they try to piece together memories and unresolved trauma that is possibly best left buried in the past.

Sandra Wollner’s stylishly provocative film feels visually and tonally similar to Veronica Franzen’s (Good Night Mommie, but thematically she has struck out in a daring new direction mining the rich potential of groundbreaking science in a feature that explores memory, loss and loneliness in both past and contempo states of mind. And she discovers that sometimes the past is best left well alone.

Her first feature The Impossible Picture examined memory and its unreliability in a narrative set in the past but projecting into the future. With this second feature she develops the storyline from a complex base (not the other way around) and reconstructs families that never existed. And so the robot becomes a mirror of human emotion, and the film an intriguing pathway into virtual and psychological realities.

The final twist leads us forward even further to the future – although some scientists say it already exists – to a time where robots get the upper hand. Time Kroger’s pristine visuals and Pia Jatos’ set design create this world in a way that feels both contemporary and strangely retrospective, but always surreal and alienating. The contrast between robots and real characters is eerie but seamlessly realised, creating an extraordinary fantasy feature that scratches at the edges of sci-fi and horror but is firmly underpinned by reality. MT