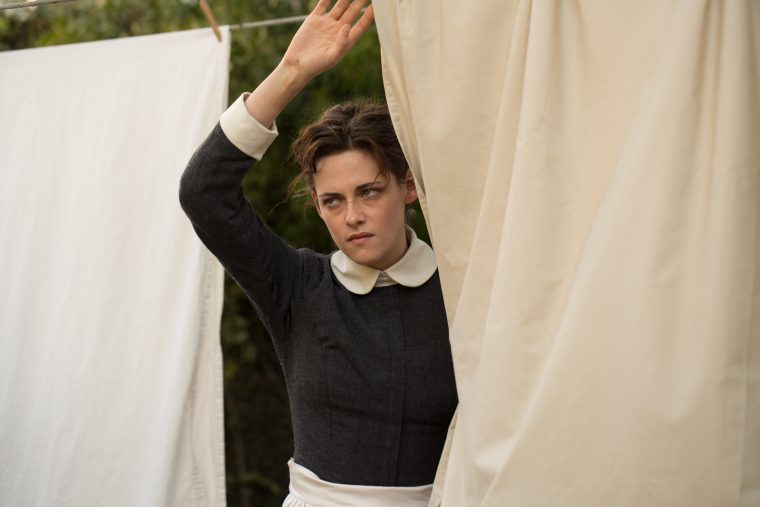 “Lizzie Borden took an ax and gave her mother 40 whacks. When she saw what she had done, she gave her father 41.”

The story of Lizzie Borden has always fascinated with its macabre murder story that over time has spawned numerous TV series the best starred Elizabeth Montgomery as the New England axe murderer who was tried and acquitted in 1893 of slaughtering her father and stepmother. This claustrophobic domestic drama directed by Craig William Macneill from a script by Bryce Kass, persuades us that it was actually due to her gender that she was let off: the jury couldn’t believe a well-heeled gentlewoman could do such a thing. But there are many downsides to being Ms Borden in the late 19th century. LIZZIE not only imagines an intriguing and plausible lesbian twist to proceedings, it also reveals how her draconian and misogynist  father was partly responsible for his own demise by dominating her, serially raping her housekeeper (Kristen Stewart is mesmerisingly glum) and then leaving her repugnantly obnoxious uncle (Denis O’Hare) in charge of her inheritance. No wonder Mr Borden got wacked.

Kass adopts a fractured narrative that opens in the aftermath to the twin murder, then traces back to reveal a story that informs the final scenes. And although this is a traditionally-crafted and rather bland-looking affair, its slowly draws you in to its compelling storyline mainly due to the brilliance of its international cast. We have Chloë Sevigny in the leading role: an unmarried, wilful but sympathetic pigeon-fancier. She gives a commandingly confident performance and we really feel for her because of the calm and intelligent way she handles herself, never giving in to histrionics or melodrama, despite suffering from epilepsy – quite the opposite – in the final denouement she appears unaffected by what she has done. She warms immediately to Kristen Stewart’s Irish housemaid Bridget who is respectful and diffident, tolerating Mr Borden’s nighttime visits with sombre forbearance. Their lesbian chemistry is convincing but quite why the filmmakers contrived it is questionable. There’s scant evidence that the real Lizzie was a lesbian, but due to being closeted away it’s quite possible that it was the only sexual outlet available, and the two are clearly very protective of one another. Ruth Shaw has a small role as Lizzie’s dour stepmother, but she makes a decent go of it.

There’s a dark wittiness to Sevigny’s brushes with the menacingly pompous Mr Borden (Jamie Sheridan), and their intellectual sparring makes us root for her, as he emerges a brutish coward rather than a family man of integrity with one of the “biggest fortunes in New England”. And although Stewart seethes with a quiet rage, Sevigny excels in a more difficult role, exerting a calm allure as the troubled Lizzie.

Although the ending is hardly a mystery, the film maintains an powerful air of suspense as it moves to the inescapable finale, adding another dimension to this true crime story, by attempting to examine the whys and wherefores. LIZZIE is certainly harrowing to watch, and although we don’t see the murders, we hear them as the violence provides a much-needed cathartic release after all the injustice that’s been witnessed. A sad and rather mournful drama that certainly bring greater understanding to this almost mythical episode of American social history. MT