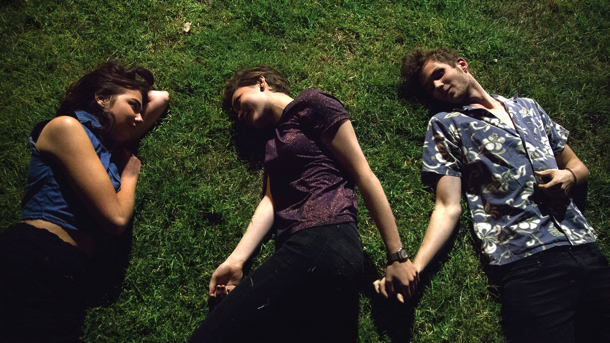 Newcomer Tilda Cobham-Hervey gives a dynamite performance as sixteen-year-old teenager, Billie, in Sophie Hyde’s fresh and frisky drama about female sexuality. Just as Billie is ready to discover boys, her divorced mother (Del Herbert-Jane) has decided to become James, in a challenging transformation that will take a year. To make things easier, Billie goes to live with her father Tom (Beau Travis Williams) but this change of circumstances leaves a gaping hole in Billie’s emotional life, just when she needs her close female role model the most: they shared everything and James’ promise to spend every Tuesday with her offers little comfort. Tom is in a new relationship and offers little help or support as a dad.

Sophie Hyde is best known for her documentaries and here she makes use of that experience with docu-drama style that takes the form of a video diary through which Billie records her emotional journey. In order to retain a feeling of authenticity, filming took place chronologically over the period of the year during which James’ amazing transformation (with incipient to full beard) provides fascinating food for thought as well as engaging factual information about female-male transition. But it’s Billie’s emotional state that really strikes the most meaningful chord as we witness the fragile mother-daughter dynamic slowly degenerate. James’ focus on his own burgeoning sexual desires leave little room for his focus as a ‘mother’: it’s a big leap of faith to expect Billie to suddenly understand an adult male’s issues when she herself is undergoing so much disorientating change from being a little girl to a woman, with hardly any guidance.

52 TUESDAYS asks the evergreen and universal question: do we have a duty of care to our kids when they really need us most, or is our own happiness of primary importance in best equipping us to provide this valuable emotional succour. Obviously it’s a question without an answer, and Sophie Hyde’s observational style offers a non-judgemental snapshot. As Billie, Hervey-Cobham is tender, endearing and vulnerable as she manages her life as cheerfully and as intelligently as possible in challenging circumstances. Sadly Del Herbert Jane as James, much as we want to understand him, never really convinces us or engages our sympathies in his own transformational journey. MT