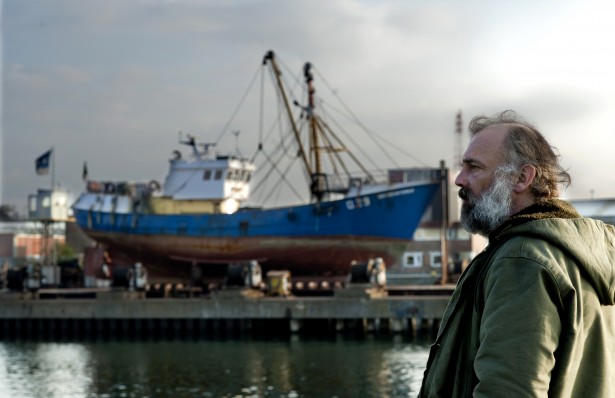 There have been a number of really good marine-themed films of late including Mario Herce’s Dead Slow Ahead (2015); Delphine Coulin’s Stopover/Voir du Pays; Axel Koenzen’s Deadweight; and Felix Dufour-Laperriere’s Transatlantique.  Sadly this is not one of them, but is worth a watch.

What starts as an intriguing ‘man overboard’ thriller rapidly plunges into the maudlin territory of people trafficking in the grim Dutch debut that tries to be all things to all people with a male-centric narrative exploring the aftermath of tragedy for a struggling North Sea fishing company after the patriarch suffers a life-changing fall. Written, directed and produced by Gilles Coullier, the ace up CARGO’s sleeve is a brooding turn from Flemish actor Sam Louwyck as Jean, the eldest son responsible for the ailing fleet. Battling to bring up his 8 year old son, the single father is also tasked with managing his youngest brother Francis, who is a loser hiding his homosexuality, and the black sheep of the family William, who truculently wants to carrying on the family business, against all odds. Three signatures are required to put the business to bed. The other good thing about CARGO is David Williamson’s widescreen camerawork that makes the dismal North Sea coastline sing powerfully with muted blues and forboding greys, echoing the sentiments of this turbulent family saga with its universal themes of migration, financial crisis and the ties that bind. MT