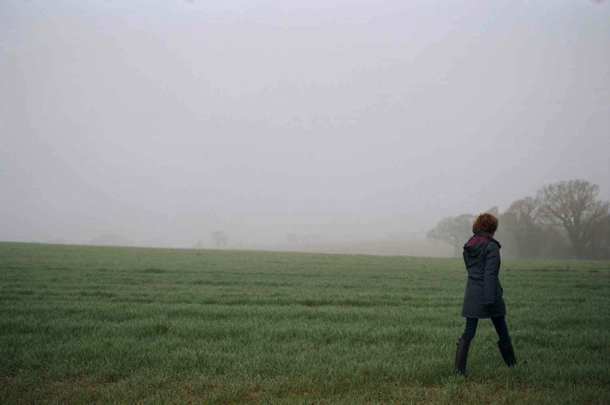 The past can rock the future even in the toughest of relationships; chipping away at stable foundations; challenging deeply held beliefs and tricking the mind until nothing seems certain anymore. 45 YEARS is a sensitively-performed character study where an avalanche of feeling slowly builds momentum. Based on a short story by David Constantine, Andrew Haigh’s follow up to his breakout success WEEKEND (2011) is a drama full of the unexpected.

Charlotte Rampling and Tom Courtenay play retired couple, Kate and Geoff, now in their 45th year of marriage. Both have played vital roles in the Norfolk village where Kate is a retired headmistress and Geoff a former trade unioner. Clearly she is posher that he is and the more introverted of the two. Keeping a certain dignified distance from the world, she is elegant, understanding and discretely passionate. Geoff is clearly slightly older, more erratic in his moods and movements but less emotionally buttoned down, especially after a drink or two. Content to be together in companionable silence, they are sociable without being overly involved in the outside community and still enjoy occasional sex. There are no children to fuss over, but Kate walks in the countryside with her Alsatian, Max, and Geoff is an armchair philosopher dabbling in the works of Kierkegaard. Arrangements are in place for an anniversary celebration in the village and Kate is putting the final touches in place when Geoff receives a letter.

The body of his previous girlfriend, Katya, has been discovered after disappearing during their walking holiday in the early 60s. The news triggers a reaction in Geoff that cannot be brushed aside. At first, Kate is unperturbed by the news but gradually the ripples of this revelation ruffle their regular routine. The absence of any clarity from Geoff as to why the tragedy has affected him so deeply sends Kate rummaging through the attic looking for evidence.

Andrew Haigh’s drama offers endless opportunities for speculation: Does anyone really know their partner or, indeed, themselves? One of the photos Kate discovers seems to hint that Katya may have been pregnant, yet the childlessness of Geoff and Kate is never discussed? Perhaps they couldn’t have children together so this putative pregnancy pushes Kate over the edge leaving her feeling jealous and even envious of a child that was never born. Was their marriage built on rebound love: Did Geoff settle for second best and is their relationship just a sham? Endlessly, the narrative picks away at scabs long-healed and threatens to create new ones.

During the party, Geoff seems over-emotional but Kate is distant. Her friend Lena (a delightfully voluble Geraldine James) hints at tears for the men “they always break down’ and yet it appears that Kate is the one who feels more cheated; smiling through the pain of this sudden slap in the face, with a false bonhomie: all along she felt she had triumphed in the game in of life; came up and finished first – is she now just a disillusioned loser?

After a silent hour or so of the drama, the party band strikes up with Golden Oldies from the sixties. But are they tunes that Geoff enjoyed with Katya? The almost unbearably poignant dance scene is loaded with so much latent anger and unexpressed emotion it echoes that of PHOENIX (coming in May). This is a fine and complex drama featuring two skillful performances from a legendary British duo. MT