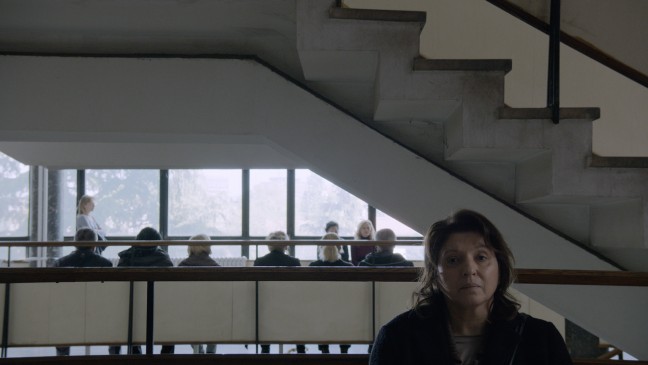 Living in a state of flux is complicated, but dying is even harder, as Mrs J finds out when she tries to commit suicide, in this dark but beautifully captured comedy from Serbian New Wave filmmaker Bojan Vuletić (Practical Guide to Belgrade)

Jelena has reached her early fifties with nothing to look forward to. The loneliness of her newly widowed state is amplified by her selfish daughter’s active sex life with her fiancé Milan, who shares their comfortable suburban flat along with Jelena’s elderly mother-in-law. We first meet Mrs J nonchalantly assembling a gun and silencer at the dining room table in a scene that is not only shockingly deadpan but also mildly hilarious. The whole film is embued with ironic moments like this, where gentle humour comes from the Kafkaesque task of simply sorting out her affairs, before she pulls the trigger and ends the abject pointlessness of it all.

Many will empathise with this universal portrait of a woman who is resigned to die, simply because the rest of her life seems to stretch before her as an emotionally arid desert, where her own modest but worthwhile life experience is regarded and reflected back on her as superfluous and even downright irritating by the younger generation, compounding even further the dejection she already feels. This is an incredibly difficult role played with nuanced subtlety by Mirjana Karanovic (When Father Was Away on Business) who captures without rancour or bitterness the utter despondency of a woman’s middle-age cast adrift in a country that offers no certainty, swinging back and forth between torment and transition. The authorities are unable to cope, Jelena’s former employers are now bankrupt and the remaining staff are just killing time.

Expertly framed and filmed by Jelena Stankovic; this is a quiet gem of a film that carries a small but delightful message of hope in the final scenes proving that nothing is ever quite as bad as it seems when family and friends rally in support. MT