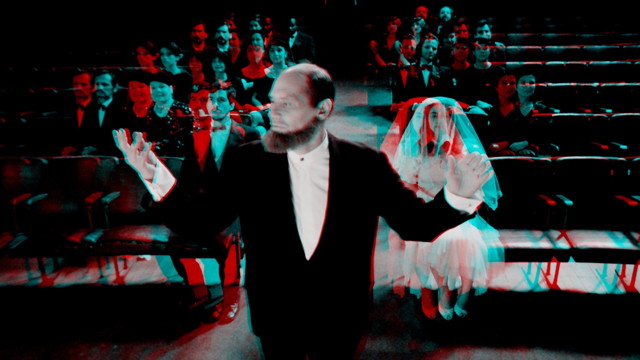 Assaultive triptych 3x3D caused walkouts when it premiered in Cannes last year. On that occasion, the last of its three parts was that by Portuguese director Edgar Pêra, whose contribution followed those of Peter Greenaway and Jean-Luc Godard. Tellingly, in both the version I first saw at Seville European Film Festival last November as well as that which screened twice to an encouragingly if uncomfortably packed house at IndieLisboa last week, the order has been shuffled: Pêra’s entry is now placed second, bookended by his appreciably stronger counterparts.

As a portmanteau film, 3x3D is a typically uneven work, one whose appeal is rooted in its attraction of ‘big names’ to one project, but whose limitations are also found in that anticlimactic feeling of fulfilling a fantastical scenario in which several otherwise disparate heavyweights finally meet. 3x3D is one of two such projects made as part of the 2012 European Capital of Culture initiative by Portuguese city Guimarães – the other being CENTRO HISTÓRICO (also at this year’s IndieLisboa), which pulled together Aki Käurismaki, Victor Erice, Pedro Costa and Manouel de Oliveira to varied effect. In neither case does the world explode.

Greenaway begins proceedings with ‘Just in Time’, a bedazzling and almost self-parodic dash around Guimarães’s centre. Maximalist even by Greenaway’s standards, it plays out like a cross between an overwhelmingly unnavigable, formidably comprehensive and conceptually pretentious CD-Rom and RUSSIAN ARK on amphetamines. Greenaway himself partly narrates us through the first capital of Portugal’s legal, religious, military, sexual, literary, cultural, musical, political, architectural, social and even archaeological history, piling calligraphies upon calligraphies, splitting the screen into three horizontal banners and throwing orbs at us along the way. Greenaway may well know more about Guimarães than his audience does, but he evidently has little interest in imparting such knowledge in a digestible manner.

Of the three, Godard seems most at home working in 3D, adding to his deceptively unvaried CV as a master trickster, reusing sequences and techniques from his unfathomably acclaimed epic HISTOIRE(S) DU CINEMA. ‘The Three Disasters,’ as his contribution is called, philosophises on cinema, life, the Holocaust and moral responsibilities with smart-aleck epigrams and the safety net of old-vet humour. The greatest trick the devil ever pulled? Convincing the world he’s a genius.

There were laughs at the beginning of Pêra’s literal centrepiece in Lisbon, but the local charm seemed to wear thin fast – and understandably so. ‘Cinesapiens’ tells us that “there is nothing more unreal than yesterday’s realism,” as kitschy cavemen watch a present-day theatre fill up. “Cinema,” so it goes, “has betrayed provocation, sacrificing the fraternity of metaphors for the business of stories.” Trouble is, Pêra mixes his own metaphors so thick that his fraternity appears to be an obnoxiously derisive mess.

Unfolding like an all-cylinders performance piece one may come across at a workshop designed to exorcise pent-up stress, ‘Cinesapiens’ is the kind of bottomlessly dreadful curio one might happen upon in some gentrified warehouse along the River Thames – and walk out of in embarrassed laughter immediately after. The 3D is terrible, too: never have dissolves and overlays seemed so incessantly ugly. The only thing more offensive than Pêra quite obviously fancying himself as a jester? The notion that he also considers himself a historian. Michael Pattison

INDIELISBOA runs until 4 MAY 2014 in Lisbon, Portugal