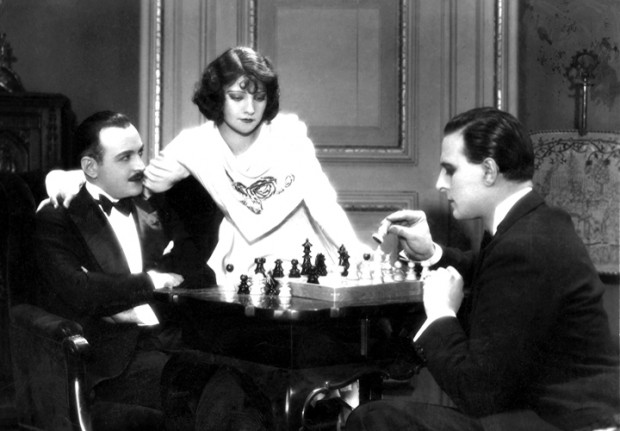 Gustav Machatý (1901-1963) continues to be remembered today primarily for launching the international career of Hedy Lamarr by exposing her naked charms in Extase (1933). But his earlier EROTIKON is easily the more accomplished film, as was confirmed by its recent screening at the Barbican as part of the Czech Centre’s 20th Made in Prague Festival. EROTIKON was Machatý’s third feature and his last silent, and like Extase earned international notoriety for its nude scene. Stills from this scene identified as Ita Rina have often appeared in books; but it turned out not to be in the print shown at the Barbican. What we are left with is heady enough, however, with director Machatý and his cameraman Václav Vích’s restless camera juggling a rousing brew of lust-crazed close-ups, arty superimpositions and intoxicating Freudian scenes of railway engines in full steam.

Two films were made during the twenties with the title EROTIKON, the first being Mauritz Stiller’s saucy comedy of 1920. Machatý’s film at first resembles Griffith’s Way Down East, with Andrea, the sweet young daughter of a railway gatekeeper ravished by a city slicker named Georg Sydney – who wears more even makeup that she does (especially around the eyes) – and woos her with sophisticated metropolitan blandishments such as an enormous bottle of perfume marked EROTIKON. Having got Andrea pregnant, he returns to his glossy married mistress Gilda back in the big city. As happens in so many movies the baby is conveniently stillborn and when Andrea’s path again crosses that of Georg she has a wealthy new husband on her arm and a sumptuous new wardrobe on her back. Here Griffith-style rural pathos abruptly gives way to Noel Coward-like urban sophistication. The five main players now comprise the original lover, two married women and two husbands, and the fun can really start; including a suggestive chess match between romantic rivals worthy of The Thomas Crown Affair (and which also anticipates Zvonimir Berković’s Rondo [1966]).

Andrea is played by Ita Rina, formerly Miss Slovenia of 1926, the bridge of whose nose appears to join her face somewhere in the middle of her forehead, giving her a profile more dramatic than even those of Myrna Loy or Norma Shearer. (In 1931 she converted from Catholicism to Serbian Orthodoxy in order to marry, and her name became Tamara Đorđević. The same year she received an offer from Hollywood which her new husband vetoed; although she continued to act in Czech films). In Machatý’s hands she does a superlative job of maturing from innocent young waif to worldly, fur-coated society wife. The scene of her arching her back in ecstasy in a quite unprecedented screen depiction of sexual consummation (later echoed in the scene in which she gives birth) is far more energetic than the equivalent sequence in the much better-known Extase. As Andrea’s new husband Jean, Luigi Serventi is plainly a far worthier catch than the unctuous Georg Sydney, played by Olaf Fjord; and Charlotte Susa is a blast as the mistress who doesn’t take her relegation lying down (it’s also probably her – rather than Ita Rina as is always claimed – who did the nude shot). RICHARD CHATTEN

MADE IN PRAGUE SEASON CONTINUES AT THE ICA