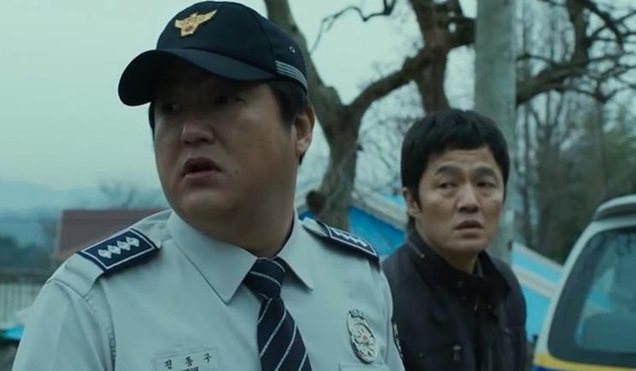 Director/writer Na Hong-jin (The Yellow Sea) imagines a monstrous journey into the occult – gigantic not only in length, but also in narrative and aesthetic over-kill. What makes THE WAILING bearable in spite all of the hocus-pocus, is the performance of lead actor Kwak, whose police officer Jong-Goo is more of a loafer than an enforcer, bringing some comic relief to the often gruesome proceedings.

Set in the same rural environment as many of the famous South Korean detective mysteries like Memories of Murder, Jong is introduced at the breakfast table with his wife and daughter, eating leisurely before setting out to investigate a multiple murder – as if this would be a routine case in his tranquil village. As it turns out, Jong doesn’t need to worry, because the culprit, the father of the slain family has been already caught. Soon more gruesome killings occur, and Jong sets out into the woods, to look for the chief suspect, a Japanese stranger (Kunimura), who has been spotted eating animals. But in spite of employing a shaman (Il Gwang), Jong does not get any nearer to the solution of this mysterious murder spree, which starts to dominate his dreams, But worse is to come when his daughter (Hyo-jin Kim), is affected by the illness. Then a strange woman (Moo) starts throwing stones at the detective, before warning him that the Japanese is not the culprit. In the end, THE WAILING ends as it began: as a riddle about religious obsession: which is really the devil behind the mass slaughter – and poor Jong has to come up with the right guess, to save his daughter.

THE WAILING is not a traditional horror movie, it does not rely on jump-scares (only once) or use sound as a harbinger of approaching evil – it more or less sucks the audience in, just like the virus spreading in the village. This is a story about desperation, the helpless Jong (and the audience) trying to find a rational solution for the crimes. There is contamination, affected victims vomit constantly: bodily and psychologically possession is the name of the game. But in the end, this endless cycle of new victims and new suspects is tiring: the self-indulgence of the director takes it toll – not only in running time, but in the narrative structure of film. DoP Kyung-pye is able to create to create two separate worlds: the mundane village life, to which Jong clings too long for his own good, and the jungle of the woods, from where evil spreads. It is ironic, that after such an exhaustive tour-de-force the main emotional impact should be deflation. AS

ON GENERAL RELEASE FROM 25 NOVEMBER 2016