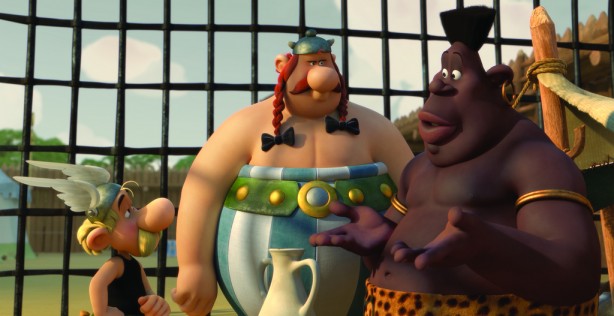 Animation 3D; based on the comic book of the same title by Rene Goscinny and Albert Uderzo from 1971

After some sadly failed attempts at live-action, our Gallic heroes re-emerge as the original cartoon figures: this time in 3D and with lively CGI action.

Beastly Caesar plots in Rome (again) the downfall of the last village in Gaul not under his control. This time he wants to undermine the spirit of the villagers by building huge luxury mansions around their village and populating them with Romans, who soon find the villagers quaint and since everything is so much cheaper than in the capital of the empire, trade breaks down the barriers. But the development goes both ways: the villagers find the apartments appealing and only a pact between the exploited black slaves, who build the mansions, and Asterix and the druid Getafix (with the usual physical assistance of Obelix) avoid the villagers losing their independence.

MANSION OF THE GODS falls between two stools: whilst the action will keep younger audiences occupied, the rather complex plot with its very adult connotations is rather secondary to the main target audience. This is hardly unique: most modern animation classics are equally loved by adults – not only parents – and the younger audience. But in this specific case, the underlying ideologies are so complex that they might detract from the enjoyment for anyone not interested in labour laws, equality and racial harmony. The merits of CGI and 3D have ben endlessly discussed, and after watching MANSION OF THE GODS the 3D feels like a gimmick, adding nothing to the original. Certainly, CGI improves the action-orientated sequences, but it also somehow adds a soulless quality – our eyes are, after all, meant to watch analogue images, not digital ones.

That said, diehard fans of the original cartoons will no doubt lap this up, particularly those who devoured the original adventures back in the day. AS