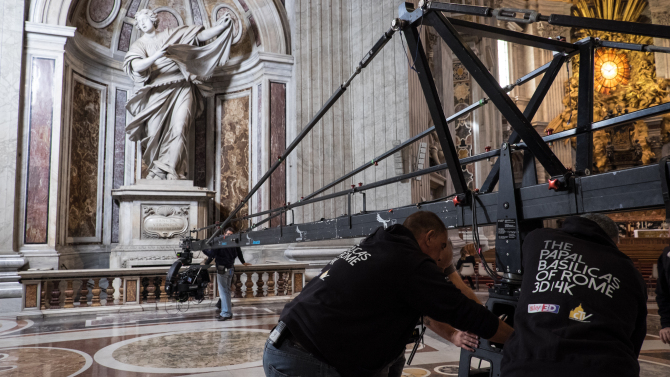 St Peters and the Papal Basilicas of Rome (2016)

Director Luca Viotto (Florence and the Uffizi Gallery) is back with another cultural travelogue; this time he turns his camera on the four main basilicas in Rome to offer an architectural exploration with commentaries by leading museum directors, an architect and an art historian, and readings from Stendhal’s diaries between 1814 and 1821 (when he was expelled as a spy). For lovers of art history and architecure this is an informative and aesthetically overwhelming portrait not only of the basilicas, but their central function in Rome.

Antonio Paolucci, the Vatican’s Museum director, comments on the building of St. Peter’s, which took nearly 100 years to complete in 1626. Its main architect, Michelangelo, did not see the finished building, the world’s largest church which also has the world’s tallest dome  Housing Michelangelo’s Pieta and Bernini’s baldacchino. The latter also designed the Piazza San Pietro in front of the basilica.

The Papal Archbasilica of St. John’s in the Lateran is the “Mater et caput” of all the churches in the world, not only Rome’s. It was founded in the forth century by Constantine the Great, and is dedicated to John the Baptist and John the Evangelist. The architect Paolo Portoghesi describes all the phases of the re-construction well into the 18th century, when the great façade, a two-storied portico supported by giant columns and crowned by 15 meter high statutes and white marble steps, cased in wood, which, so the Catholic teaching, were used by Jesus on his way up to Pilatus “Praetorium” before his trial.

The basilica of St. Mary Major, the largest church in Rome, dedicated to the Virgin Mary, is located on Piazza Equilino, not far from the Termini train station. It is the only basilica of the four, which has kept the paleo-christian structure of the 5th century, even though, as art historian Claudio Strinati explains, it underwent countless makeovers and additions. One of them is a campanile (bell tower) added in the 14 century, the highest in Rome at 75 meters. The 16th century coffered ceiling, designed by Guiliano da Sangello, is said to be gilded with gold from the Americas, presented to Pope Alexander VI by the Spanish monarchs Ferdinand and Isabella.

The Papal Basilica of St. Paul Outside the Walls is the second largest basilica of the four. It was founded by Emperor Constantine I, and covers the burial place of St. Paul, who was supposed to be beheaded on this site. Whilst the basilica has maintained most its original structures, it was nearly completely destroyed by fire in 1823. Pope Pius VII, who was dying, was not told of the destruction. His successor Leo XII, ordered a total reconstruction, a work, which lasted until 1930. As Micol Forti, the director of the Vatican’s Museum collections (by far the liveliest commentator) explains, the nave’s interior walls are decorated with scenes from St. Paul’s life. South of the transcept is the cloister, one of the most beautiful of the Middle Ages, designed by Vassaletto who also designed the magnificent Easter candle stick.

Massimilano Gatti sumptuous camerawork glides impressively over the city into the basilicas, treating the churches and piazzas like giant film sets, which provided the backcloth to the city’s fascinating political and ecclesiastical history. The endless data is rather dry and overwhelming, but for devotees of this is provides comprehensive and compelling viewing. AS

A ONE OFF SCREENING AROUND THE UK ON 4th July 2016 at DISCOVERARTS.CO.UK