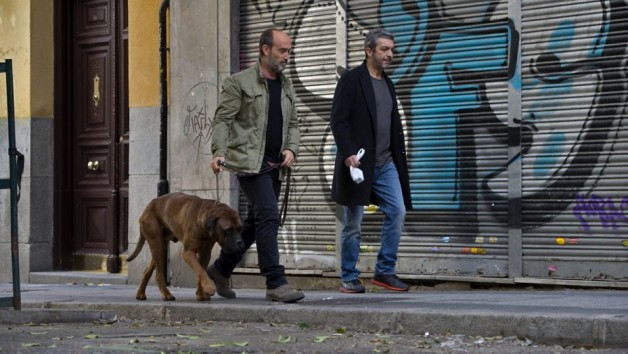 This warm-hearted and sensitive ‘buddy movie’ is told with a gentle humour and frankness that will resonate with those familiar with final days of friends or parents who have reached the end of their time together. TRUMAN is a character driven arthouse drama which features two strong performances from Ricardo Darin as Julian, a slightly passive aggressive Spanish actor who is on his way out, and his laid back and supportive friend Tomas who makes a surprise visit from Canada, to be with him. Essentially a two-hander, TRUMAN enjoyably sidesteps sentimentality opting for an honest and deadpan approach but it also deals with the thorny themes that can surface when life and friendship reaches the end of the road.

In Madrid, Julian (Ricardo Darin) is dying of lung cancer and has decided to put his affairs in order, gradually saying his goodbyes as honestly as he can to his friends and colleagues. On the suggestion of his sister Paula (Dolores Fonzi) his best friend Tomas (Javier Camara) pays him a surprise visit from his home in Canada but rather than wallowing in self-pity, Tomas finds his old pal engaging in displacement activities, and more concerned with the re-homing and emotional welfare of his dog Truman (Troilo) than with his with own chemo treatment, which he has decided to terminate.

The two settle into an agreeable rhythm where Tomas accompanies Julian to his old haunts as he ties up loose ends. It’s not all plain sailing here as ructions do develop but are swiftly smoothed over in the best of humour. In one such scene, Julian approaches a couple of colleagues he sees in a local restaurant, pretending not to notice him – clearly they feel unsure and uncomfortable with the Julian’s situation – and Julian flags this up with dignity and aplomb. And it is these kind of touches that make the film feel authentic and genuine engaging rather than mawkish or morbid.

Insightfully written and beautifully acted by its accomplished Spanish cast, what really makes TRUMAN special is the impressively subtle take from Ricardo Darin, who breezes through every scene with a wry and self-effacing candidness that is perfect for a film that seeks to avoid emotionalism but ends up with some incredibly moving moments accompanied by soulfully scenic visuals of Madrid and Amsterdam (where they visit Julian’s son), and a suitably atmospheric score that somehow feels just right.

The only character that feels out of context and is that of Paula, who’s has an awkward rapport with Tomas from a past involvement and puts a spanner in the works in the final scenes that feels forced and inappropriate in the scheme of it all.

Full of philosophy, TRUMAN explores the suffering behind bereavement with a dark humour that makes this drama enjoyable and full of subtle charm.

OUT ON RELEASE AT SELECTED ARTHOUSE CINEMAS FROM 6 May 2016