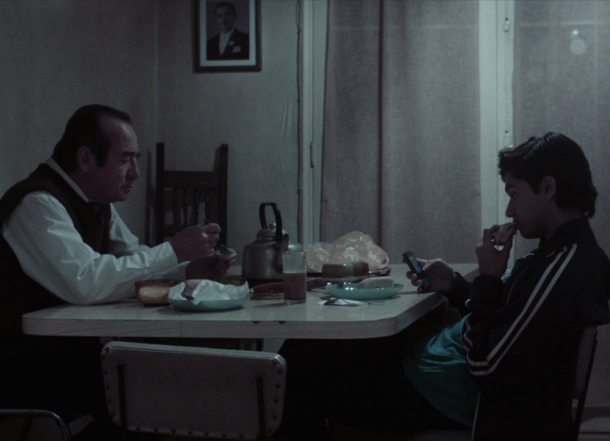 A tribute to Daniel Zamudio, a Chilean gay man who was brutally murdered in 2012 by neo-Nazis, musician Alex Andwandter’s directorial debut is a tight and claustrophobic study in grief, loneliness and betrayal.

It follows Pablo (Bergsted) a young man still living with his father Juan (S. Hernandez), who manages a mannequin factory. The two have little in common and a poor emotional rapport since Pablo “showed a limp wrist”, indicating a lack of manliness in a society dominated by macho-values and masculine role models.

Whilst his father works long hours, Pablo takes ballet lessons and hangs out with his longterm friend Felix (Leiva) and Lucy (G. Hernandez), who has a crush on him. When Pablo and Lucy are chased by two homophobic young men, who, with the help of Felix, corner Pablo and beat him so severely, that he falls into a coma his father is naturally distraught, but worse is to follow: due to a glitch the health insurance is declared partly invalid. Then an old “friend of the family” admits she asked Felix and the men who beat Pablo up, “to be nice to the gay man, because he is different from you”. Juan loses it and confronts Felix, who denies any wrong doing. Juan, having raised Pablo single-handedly from a boy, can’t take any more. Having been lonely for most his life – after his much younger wife left him – he  decides he has to change his cautious way of life.

Far from being an over-excited melodrama, YOU’ll NEVER BE ALONE is a concise, ruminative and claustrophobic study in grief, betrayal and loneliness. Darkness (literally and contents wise) dominates: in a world of semi-daekness, and all the interiors feel oppressively, particularly the ghostly shop window mannequins factory, which seems to be underground. Juan has retreated into an inner world; his house is neglected, and Pablo’s room, is more like a prison cell. The hospital corridors, where Juan meets a helpful nurse, are more like a morgue than a place for the living. DOP Matias Illanes captures at atmosphere of tension which plays like the endgame of a relentless chess match where the players are slowly and tortuously extinguished. Sergio Hernandez carries himself like an old fashioned hero from a ’40s film noir: beaten already, before the first blows rain down on his son. This harrowing, mournful and forlorn debut is relentless and leaves the audience heartbroken. Far from being an melodramatic meltdown, YOU’LL NEVER BE ALONE  is ruminative and dark in tone and texture, locked down in a world of negativity and isolation. AS