The venerable status that Roger Corman’s Poe cycle of the early sixties continues to command within the Horror genre makes the continued neglect of The Haunted Palace all the more perverse. It’s usually just mentioned in passing as the last gasp of the Hollywood-made Poes before Corman packed his bags for England and ended the series with a bang with the acclaimed Masque of the Red Death and The Tomb of Ligeia. It didn’t even get reviewed by Variety when it opened in the summer of 1963 and wasn’t released in Britain until 1966. What comment it draws is usually as the Corman/Poe that was actually an H.P.Lovecraft; although just that fact alone actually makes The Haunted Palace a very interesting film indeed, marking as it does the big screen’s first-ever adaptation of a story by an author whose stature and popularity as a source of screen material has continued to snowball ever since Corman set the ball rolling (including a second version of the story Corman filmed called The Resurrected (1991), directed by Dan O’Bannon with Chris Sarandon as Charles Dexter Ward). 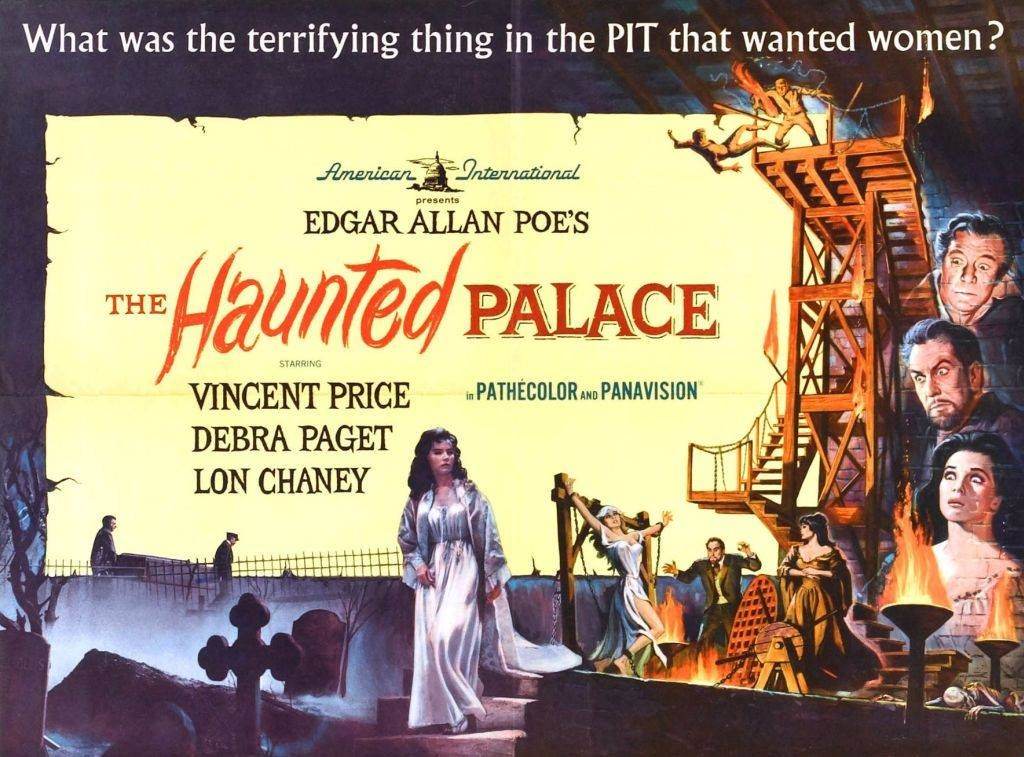 The usually perceptive Leonard Maltin continues to dismiss The Haunted Palace as “Good-looking but minor”; which probably means that he hasn’t looked at it again recently. But over the years it has found unlikely admirers. William Everson – not usually a Corman fan – thought it “one of the better Roger Corman horror films of the 60’s”, while the usually hard to impress Angela & Elkan Allan in 1980 declared it “A really enveloping horror movie that chills you deep into your spine”. It is in fact easily the best of Corman’s American Poes – and quite probably one of Corman’s best films ever – as well as being first-class Lovecraft.

Adroitly if loosely drawn by Corman regular Charles Beaumont from The Case of Charles Dexter Ward, written by Lovecraft in 1927, and mostly set during the 1920s; the film moves the main action back to the 19th Century to visually bring it into line with Corman’s earlier films and recycle the costumes and sets from The Premature Burial. With each successive Poe adaptation the existence of standing sets from the previous productions meant that the films progressively got bigger and bigger looking with the addition of new sets by Daniel Haller. The Haunted Palace – photographed as usual for all that it’s worth by the veteran Floyd Crosby – is consequently the most expensive-looking of all the American Poes: all the better to savour on Blu-Ray!

Corman could also now afford to populate his version of Arkham (which Beaumont – who knew his Lovecraft – has cannily substituted for the original setting of Providence) with familiar faces like Lon Chaney and Elisha Cook: both making their only appearance in a Corman production. Lovecraft’s Charles Dexter Ward was a callow, unmarried young man in his twenties, so providing him with a wife (played in her final film appearance by Debra Paget) is one of several changes Beaumont makes to the original, along with beginning the film with the lynching of Ward’s evil ancester Joseph Curwen by burning – his demise in 1771 at Lovecraft’s hands was much more spectacular but also vastly more ambiguous – and Curwen’s curse upon the descendants of his executioners. Lovecraft describes Curwen as “a colourless-looking man of about thirty”, which hardly describes Price, who gives one of his best performance in a role strikingly similar to that of Ligeia the following year as both the benign Charles Dexter Ward and his utterly depraved great-great-great-grandfather Joseph Curwen.

Like most Corman productions it has an elegant and atmospheric title sequence; designed on this occasion by Armand Acosta to the sweeping accompaniment of Ronald Stein’s magisterial trumpet score. The main title reads “Edgar Allen (sic) Poe’s The Haunted Palace”, but Lovecraft share’s equal billing with Poe and Beaumont in the screenplay credit (the repeated misspelling of Poe’s middle name making an interesting Freudian slip). American International Pictures insisted over Corman’s objections on naming it after an 1839 poem by Poe; but apart from providing The Haunted Palace with a splendid title Poe’s only other contribution to the film – albeit employed to great effect – is the closing verse, read by Price on the soundtrack at the film’s satisfyingly spine-chilling conclusion. Try and see this one. @RICHARD CHATTEN