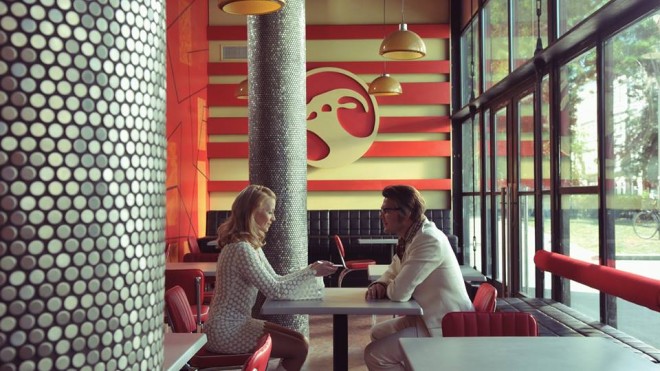 LIZA, THE FOX-FAIRY is one of the highest Hungarian budget features to be produced in recent years.  The debut of director and co-writer Karoly Ujj Meszaros, it was first developed at Cannes’ Cinefondation Atelier in 2010 and was finally released in Hungary this year, but it won’t be everyone’s cup of tea: the black, morbid humour may not translate very well outside Hungary, and the mixture of styles (the production design of Amelie combined with the narrative of a Tobe Hooper film) serves up many surprises, but could also be seen as over the top.

Nurse Liza (Balsal), is the long-term carer of Marta, the widow of a Japanese diplomat. She is obsessed with the ghost of the Japanese pop singer Tomy Tani (Sakurai), who appears to her inclusively in her dreams. On her 30th birthday she dreams that Tani murders Marta, and then goes on a killing spree, doing away with every person who falls in love with Liza. Naturally Liza becomes the main suspect in the investigation but inspector Zoltan Zaszlos’ (Fazekas) believes in her innocence. Liza gets through this traumatic experience by imagining that she has been transformed into a Fox-Fairy, a deadly demon from Japanese folklore.

Meszaros started life directing commercials in Japan and, in an interview, admits to being a big fan of Japanese culture: “Japanese culture is strange and unique. And in a way, some Japanese traditions are like some Hungarian ones. I also like Japanese pop music. I am especially fond of Asian Pop groups from the 160s and 1970s.”

While most of his compatriots are now making films in English, Meszaros opted to make the film in Hungarian. His success at the ‘Fantasponto’ Festival, where he won the ‘Grand Prix’, seems to contradict the rule that only English films have a chance of success. LIZA is very much in the vein of Gyorgy Palfi’s Taxiderma: the grotesqueness of the murders and the vivid primary colours of DOP Pete Szatmari evoke a dreamworld of horror and timeless weirdness; set in the 70s yet with all the trappings of neo-capitalism on show.

Monika Balsal is the main reason why LIZA works, in spite of its culture crashes and quotes that overload the narrative: her impressive turn as the innocent fairy-tale princess captures the audience’s imagination much more than the irritating cleverness and outlandishness of script and direction. AS