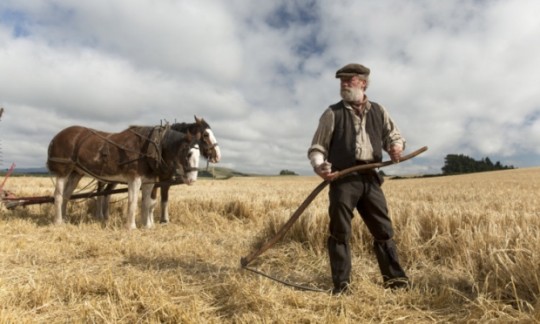 Terence Davies follows The Deep Blue Sea with another English literary adaptation, SUNSET SONG, Lewis Grassic Gibbon’s classc tale of womanhood in transition at the turn of the 20th century. Emotionally prurient and brimful with Scottish traditions from the North East, it stars Agyness Deyn in a full-bodied turn that embraces stoicism and tenderness, as the main character Chris Guthrie.

Michael McDonough’s lushly burnished visuals set the scene: a remote Aberdeenshire coastal community on the cusp of the first World War, where blue-stocking Chris is the only girl in a farming family of three boys, her trampled mother Jean and disciplinarian father (Peter Mullan in fine form) doing their best in fraught circumstances, made worse when Jean falls pregnant with twins.

There is a strict religious undertone of vehement Calvinism for this Patriarchal family: in the dour and spartan home the women’s work is never done and they are but slaves to the father’s requirements with regular beatings for elder son Will, and intercourse on demand for poor Jean, whether she likes it or not. Eventually after a bloody, difficult birth, she takes her own life, with the twins and it falls to Chris to look after the family.

Slow-burning, and often ponderous, Terence Davies balances movement with stillness to achieve graceful dramatic tension as the narrative unfolds with unexpected, even positive, twists and turns. Although occasionally SONG strikes a questionable note with his tone and scripting. There are bright moments, echoed through the glorious sun rising through lace curtains, or on the endless billowing cornfields, blue sky overhead. The post War episode feels slightly and underwritten, with no real explanation for the rapid decline into mental illness of Chris’s young husband. Musical choices veer towards the folksy and hymnal; some may argue this misjudges narrative and tone. Davies evokes happiness without being sentimental and his mastery of staging and visual compositions are superb. Bitterness, rancour and bliss, all embodied in one pivotal decade in the magnificent Scottish landscape where Chris discovers life and love as it really is. MT