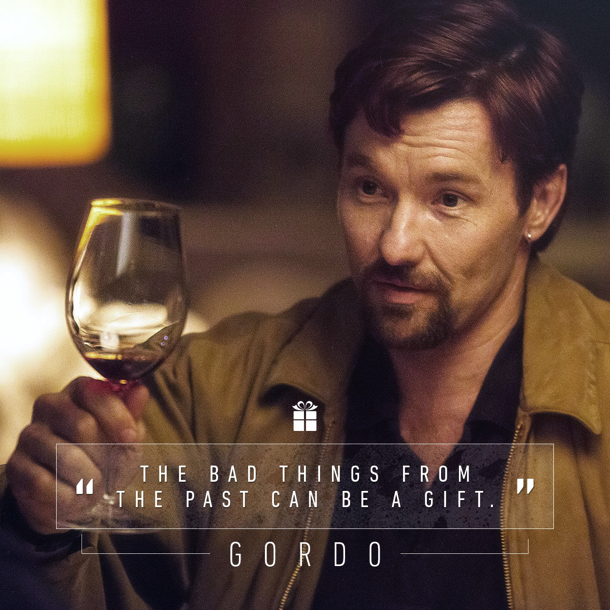 Jason Bateman and Rebecca Hall are well-cast as the couple – Simon and Robyn-  who quickly settle in a stylish house in leafy Los Angeles. But while Simon slots in seamlessly to the corporate culture – he’s a masterful decision-maker who ‘cuts to the chase’ and offers masculine stability to his emotionally frail wife – Robyn stands out in the cosy culture of stay-at-home mums called Duffy and Lucy, having just lost her own child. Shopping for cushions – wouldn’t you know – they run into Gordo, who turns out to be a friend from school days and after a socially awkward impromptu supper, Gordo swings by the following morning with a wee gifty; and starts to make a habit of it.

Alarm bells would ring for most women at this stage in the game. But strangely Simon seems to be the only one to find the ginger-haired misfit a bit of a ‘weirdo’ – in his own words. Talking in cliches, Gordo has nothing to show for his past but is anxious to ingratiate himself with these morning visits to deliver well-wrapped but inappropriate thank-you presents, including koi carp for the ornamental pond. Instead of telling Gordo to get lost, Robyn seems unruffled by his gauche air of vulnerable quirkiness and even starts telling him her woes. Clearly Robyn feels comfortable on some level with Gordo, and Edgerton’s script shrewdly taps into her feelings of insecurity at not having kids or absorbing work to keep her occupied. But Robyn even gives Gordo the benefit of the doubt when he proves to be a pathological liar and peeping tom. To give him his credit, Simon keep her involved in his new job and encourages her to think positively towards their future. But when a letter arrives from Gordo claiming his desire to “Let bygones, be bygones” Robyn inquisitiveness gets the better of her with disastrous consequences for all concerned.

Edgerton’s characterisation is a tad traditional, focusing on the classic narrative of a deteriorating husband and wife relationship, where the man is powerful and the woman is weak and neurotic. That said, they are a plausible pair, and the dialogue feels real as they interact seamlessly as Edgerton twists in the tale in anther direction. Whereas it might have been more inventive to flesh out the creepier dynamic between Gordo and Simon – offering rich pickings on the male bonding front – Edgerton reduces the mens’ quarrel to pure physical violence rather than rhetoric, blurring the lines between victim and villain by making us feel a misplaced sympathy for Gordo one minute and for Simon the next, but also cleverly providing two contrasting portraits of father/son abuse.

Stylistically, Edgerton’s film is also classic of the genre: the pet dog (Mr Bojangles) disappears mysteriously; the camera creeps through empty corridors spying upon the characters at night and in misty shower scenes, with an unsettling score.  The Gift is tonally consistent: there is no melodramatic shift or bloody climax, just a chilling realisation that leads us to our own conclusions. In the end, Edgerton offers pathos rather than pure horror. A clever and unsettling thriller and one of the most enjoyable out this summer. MT.