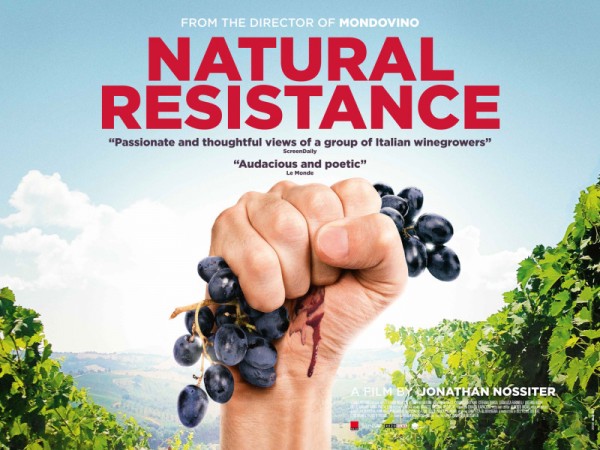 Ten years after Mondovino, where he exposed the on-goings of the French vine industry, Jonathan Nossiter visits Italy to interview ‘resistance fighters’ of the same industry who have fallen foul of the DOC (Denominazione di origene contrallate) commission in their country because of their decision to go organic with their wines

To start with, it is ironic that after Mondovino, nearly all the talking heads in NATURAL RESISTANCE praise the French model of production; their critique of the Italian DOC commission always starting with “if this was France..”, implying a paradise for organic growers in their neighbouring country. The interviewees live and work in Tuscany or Piedmont, and the film open with sumptuous views of the Tuscan holiday homes of stars like Sting and Robert Zemeckis. To accompany this filmic tipple, Nossiter has invited Gianluca Farinelli, the director of the Bologna Cinemateque, who shows clips of Goldrush and some nifty black and white newsreels from the 50s, where soon to be famous directors like Mario Soldati and Cesare Zavattini (with music by the great Nino Rota), show the powerful force of agricultural workers from a time when 66% of the country worked on the land, compared with a mere three per cent today. Less connected to the topic seems to be W.H. Auden’s poem ‘Musee des Beaux Arts”, after a Breughel painting, about the fall of Icarus.

The tenor of the interviewees, Giovanna Tiezzi (who lives in a converted 11th century monastery), Corrado Dottori (who fled from the industrial Milan after he inherited his father’s farmstead), Elena Pantaloni (who also inherited her father’s vineyard) is unanimous: The DOC, instead of championing organic production, has made farmers and vine growers adhere to the use of pesticides and organic growing methods. In taking away their DOC label, the commission tries to stamp out any winemaking methods that do not conform with the supermarkets, who control the business.

On a basic level, we are shown the enormous difference between untreated soil and the one treated with pesticides: the noxious ingredients have totally destroyed the soil by making it solid and water impermeable  leaving a unpalatable finish on our lips, before we have even sipped a glass of wine.

I spite of its goodwill, NATURAL RESISTANCE is slightly under-whelming in comparison with its predessessor – it is more an ad-hoc journey to some visit some friends with a good cause, than a structured documentary. Whilst numerous clips liven up the proceedings, the seriousness of  the ‘rebels’ who are fighting for their livelihood is somewhat undermined. That the doc will be of interest to wine buffs and devoted connoisseurs. AS