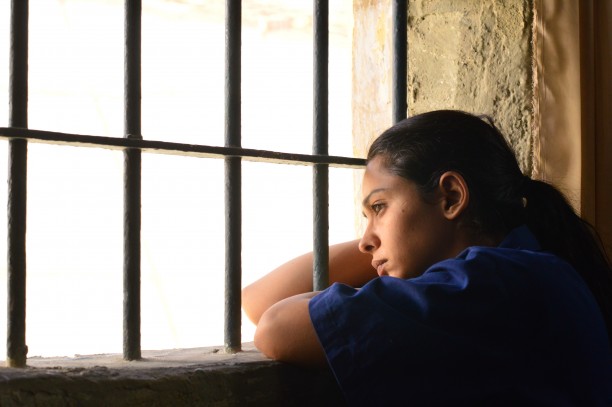 Mai Masri’s debut feature is an imagined drama based on “one story of many” to come out of Neblus. It is a rather polemic prison saga that concerns a Palestinian teacher who is incarcerated in Neblus for 3000 nights, accused of helping a terrorist.

Layla (Elhadi) is arrested in the occupied West Bank by Israeli military police for giving a lift to a young man, who may – or not – have helped a terrorist attempt. Not taking the easy way out, she refuses to say that the young man forced his way with a knife into the car. In the segregated prison, Layla, is thrown at first into a cell with Israeli prisoners, who are load mouthed, aggressive and virulently anti-Islamic. Later, she is transferred to a cell with Palestinian women, who are the total opposite of their Israeli counterparts: pure heroines in the struggle for liberation. Layla, looking extremely composed and well-kempt throughout the whole film, soon finds out that she is pregnant. Later she gives birth to Nour, a baby-boy – shackled to the bed by arms and feet. Her son is taken away from her as a reprisal for helping a prison strike. The prison authorities, lead by the vile head warden (Abeer Haddad), try to bribe Layla (and others) to gain favours for spying on their fellow prisoners, but apart from one case the women remain stand fast. But events take a turn for the worse when a woman prisoner is shot dead by a guard.

Whilst nobody can deny the existence of political prisoners in Israel, 3000 Nights is extremely unhelpful in the ongoing conflict today, because it idealises all Palestinians and vilifies all Jews – apart from Layla’s lawyer. The film is set between 1980 and 1988, a time when Palestinian suicide bombers, often children, targeted bus stations and other public places in Israel. The head warden is an evil caricature, and the cry “they are gassing us” is just inflammatory, since tear gas is used. If one would argue on the lines of the filmmakers, one would ask them why they suddenly deviate from their usual holocaust-denials.

The covered and open war between Israel and Palestine is soon entering its seventh decade, and one would hope, that films like 3000 Nights, though well-crafted and performed,  would refrain from the simplistic hero/villain line – also used in Israeli cinema, when blond, blue-eyed Jews are attacked by dark skinned Islamic villains – but this does not give any side the right, to go on with the vilification of the “enemy”. AS