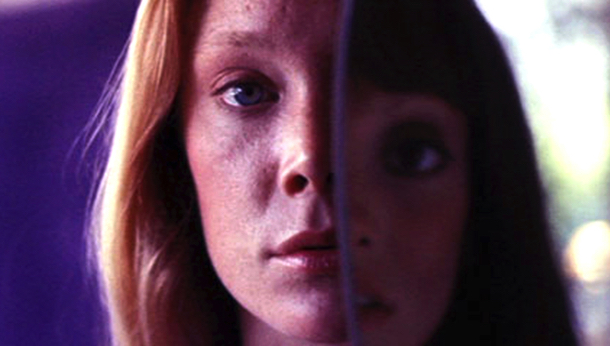 Robert Altman despised Hollywood with the true hatred of a renegade and claimed that the idea of 3 WOMEN came to him in a dream. Nowadays you have to be careful with these kind of statements – suffice to say the film is a free association on the topic of female identities, leaving ratio and conventional narrative behind. Calling the film an ‘American answer to Bergman’s Persona, does Altman no justice; the point is that 3 Women is an exercise in psychological symbolism, avoiding any classification in itself.

It all takes place in a spa for seniors in the Californian desert near Palm Springs where Millie Lamoreaux (Duvall) works as a physical therapist acquainting newcomer Pinky Rose (Spacek) with her duties in the opening scene. Millie is a walking/talking ‘Cosmopolitan’ woman, full of witticisms and superficial knowledge which she sprouts continuously.

Millie sees herself as ‘God’s given gift to men’, too often getting the bum’s rush, so it’s quite a surprising that Pinky, fresh from small town Texan small town, chooses her as a role model and soon the two are flat mates, Pinky a sycophantic sidekick to her mentor Millie

The trio is made up with pregnant Willie Hart (Rule), who paints disturbing murals on the apartment buildings and pool – owned by her husband Edgar (Fortier) – where Pinky and Millie now live. Edgar is an ex-stuntman more married to the beer bottle than his artist wife. But a startling turn of events sees the film change gear, Pinky becoming a much more functional version of Millie (and even seducing Edgar). And as the mood changes, structure and narrative also become blurred as the three women somehow drift into one united by another tragic turns of events.

What starts as a mordant caricature of California (and Hollywood) shifts in tone towards the end, the images becoming more languid, as the three women seem to glide towards one other. But this not just female solidarity at play, we are actually entering a new sphere. Altman lets the audience decide what to make of it all, offering an alternative to what has gone on before. It is an invitation to cut loose from the American dream of crass materialism and superficial uniformity, in order to find a dynamic we can share with others. Altman sets himself apart from mainstream cinema both in form and content without providing a clearly defined alternative. But, like Bodhi Wind’s murals, the emotional journey taken by these three different souls is enigmatic and mystical. 3 Women is a cinematic invitation to step outside the constraints of society, and try something different, for a change. AS