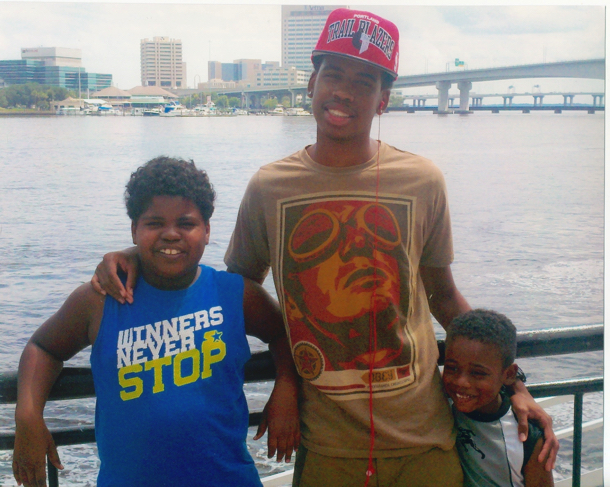 Marc Silver (Who is Dayani Cristal) has structured his documentary 3 ½ Minutes about the killing of a black teenager in Jacksonville (Fla.) and the trial of his murderer in a ‘Rashomon’ like fashion: the incident is told from of the viewpoint of the different participants, the parents of the victim and the fiancée of the killer.

On the 23.11.2012, a Sunday afternoon, four black teenagers, all of them high-school students, sat in a car at a petrol station in Jacksonville. They were approached by 45 year software developer Michael Dunn, who argued about their “loud’ music. Suddenly Dunn withdrew a concealed weapon, firing ten shots at the students in the car, killing Jordan Davis (17), miraculously missing the other three passengers. Dunn, who later claimed in his trial, that the teenagers branded a shotgun (no proof of this was ever found), drove off with his fiancée Rhonda Rouer to their hotel, where they had celebrated a wedding before. Next day, he drove them both back home, walked his dog and never contacted the police. In the courtroom, Dunn claimed the support of the “Stand your Ground” law, which allowed him to act in self-defence. Whilst the jury convicted him on the 15.2.14 on four counts of attempted murder (for which he got a combined prison sentence of 75 years), the jurors could not agree on a first-degree murder charge. In the re-trial in October of the same year, the jury did convict Dunn of First-degree murder, which leaves him no chance ever for a parole.

Silver has documented the prison calls between Dunn and his fiancée, at one point she is telling him “You’re a spirit that’s just not meant to be caged, a man of water, a man of life that’s just not to be put in a cage”. Dunn simply replied: “Right”. Ironically, Rouer’s testament in the second trial cost Dunn any chance of a parole, since his fiancée stated that he never told her about a gun being directed at him. Davis’ friends testified against him, telling the director “thug” is “the new n-word”, Dunn calling the teenagers by this name in his trial. During the trial,  Dunn either set watching detached, or teared up, when he talked about the threat he had to face, and his “heroism” in defending the life of Rhonda Rouer.

Very moving are the scenes of Jordan parents (who have separated since) in the courtroom, trying to keep their composure during the trial. Whilst Ron Davis blames himself for not protecting his son, his mother Lucia McBath will visit Washington, to speak to Lindsay Graham and Ted Cruz, about the abolition of the “Stand-Your’Ground” law, of which their son was not the only black victim. Strangely enough, when the police finally arrested Dunn, they did not had to resort to shoot him, like in other cases, when the perpetrator was black.

Apart from being informative, 3 ½ Minutes is very cinematographic, juxtaposing footing from the gas station, with the various witness statements in court. Silver puts together a mosaic of everyday racism, which seems to be prevailing in US society, in spite of an Afro-American president. 3 ½ Minutes won the Documentary Special Jury Prize at the 2015 Sundance Festival. AS

NOW ON GENERAL RELEASE from 5 OCTOBER 2015