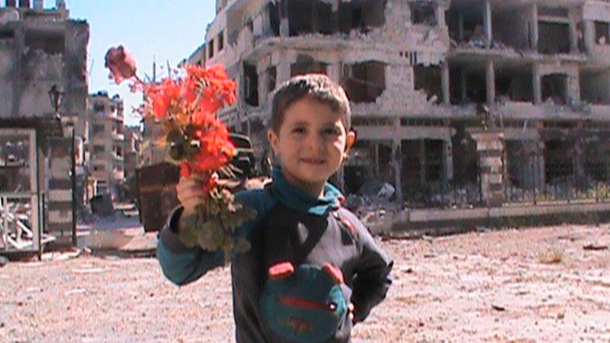 Imagine you were a filmmaker talking to a friend on a street about opening a film club in the neighbourhood – minutes later your friend is shot dead. Or you, the filmmaker, lend your camera to another friend to film a demonstration and he is shot dead moments later. Unimaginable? Not so for the Syrian filmmaker Ossama Mohammed who was driven into exile before he could finish his documentary about the cruel slaughter in his homeland. He arrived in Cannes in May 2011, without a film, but to bear witness. He now lives in Paris, looking at the images from his homeland on YouTube.

One day, a young Kurdish filmmaker, Simav Bedirxan, asks him for advice on what to shoot. (Simav means “Silvered Water”, from the Kurdish). The dialogue about the images Mohammed receives in Paris forms the centre of this “documentary” – not quite the right word here for these images of torture and death. The tales of “1001 Nights” are mentioned, but the nightmare we witness has nothing in common with bedtime stories. Protesters are stripped and sodomised with sadistic precision by soldiers of the Assad regime. We see casket after casket full of dead babies; cats are limping (burnt but just alive) around war-torn streets, so heavily bombarded that few outlines are visible. Bedirxan films herself after she has been shot, luckily it is only a flesh wound. She concentrates on the children in the playground are inured to the snipers targeting them from rooftops. She even locates a school in Homs and teaches in a cellar, before Muslim fundamentalists forbid her activity, due to her inadequate head-covering. The filmmaker flees trough a long tunnel out of Homs, a traumatic journey, every shot could be her last.

These raw images; the sound so often distorted that we seem to hear the shots as a permanent echo. The film is catalogued in chapters: burning cities, bloody snow and the photos of Bashar al-Assad dominating, interrupted aby the cutting of the umbilical cords of babies, who we see next in their caskets. SILVERED WATER is a testament of shame, a review of raw violence; the vision of a manmade hell  becoming reality, replayed day after day. Nobody who has seen this documentary knows how and when it will end. And it’s still happening right now. AS