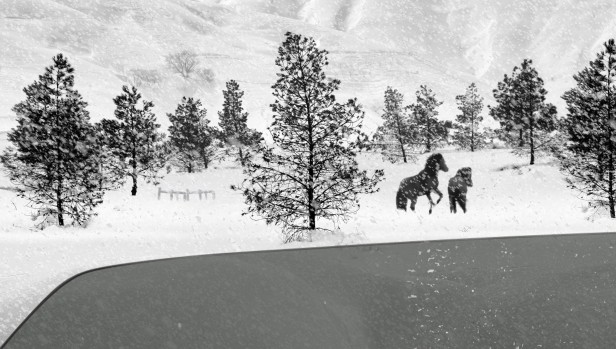 A final experimental film from Iranian auteur Abbas Kiarostami, who died last year at 76, is a tribute made especially poignant in the Festival’s 70th Anniversary. Abbas Kiarostami started life as an artist and also worked as a photographer and this clearly informs this series of delicately rendered vignettes that depict scenes from a mostly wintery nature seen from the POV of the animals. These started as photographic stills taken by Kiarostami in Tehran by the Caspian Sea. He then imagines these pictures coming to life with the action continuing for around four minutes. The result is enchanting, uplifting and poignant this experimental film has no dialogue or narrative but occasional scored by popular music and may also be viewed as an art installation rather than a film with appeal to the arthouse crowd rather than mainstream audiences.

Apart from being a visual record of his personal experiences this meditative and meaningful film offers insight into animal behaviour when seen in isolation. A seagull mourning its mate, a cat pursuing its prey and lion seduces a lioness feature in these tableaux vivants. But film opens with Pieter Bruegel the Elder’s 1565 oil painting entitled The Hunters in the Snow.  Slowly the picture comes to life as a chimney starts smoking and birds flutter from the bare trees. What remains uncertain is how he has created these moving images but it’s clear that he was intrigued by animals and particularly birds. There is even humour in one frame taken against a turquoise blue sky: a tiny bird chirps away on a pile of logs while trees are gradually felled in the background.  With the final tree falling he flies away. Another depicts a herd of cows strolling along a beach while one lies on the sand, clearly breathing. When the tide threatens to cover the animal, it ups and moves away. This all sounds simplistic but somehow can move you to tears. Another endearing scene involves a young guard dog protecting a flock of goats from the prowling wolves. Tunes accompanying are as sublime as a choral Ave Maria and as cheesy and Andrew Lloyd Webber’s music, but somehow it works.

The final 24th frame seems to echo Kiarostami’s romantic nature. In the early hours of the morning a girl is asleep by her computer where an old film is playing on slow-mo. The woman in the picture sings the Lloyd Webber hit “love will still remain.”. Somehow at the end Kiarostami breaks with his country’s strict taboos: the film contains a unveiled woman, kissing a man and singing about it alone. What a brave goodbye. MT