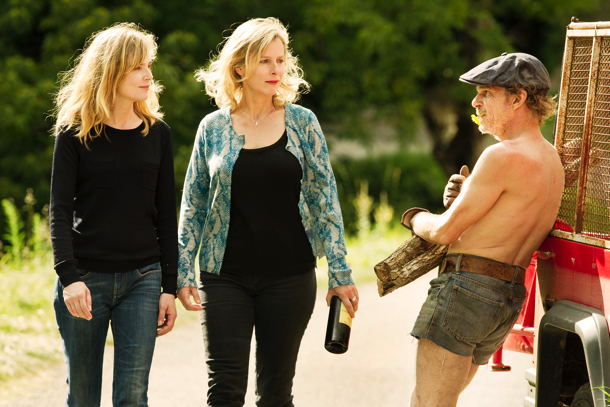 21 NIGHTS WITH PATTIE is an intriguing title for a film that blends black comedy with fantasy and magic realism. Arnaud and Jean-Marie Larrieu’s provocatively entitled Vingt et Une Nuits Avec Pattie certainly rolls off the tongue better in French, but this is a tricky tale to digest in any language, and after two longs hours and a final act that lets it all hang out, you may well come away wishing the brothers had left it at that: a boozy French drama with a touch of ‘Midsomer Murders’ and a dash of discretion.

Plunging into the bosky hillsides of Languedoc Rousillion, Caroline (Isabelle Carré) arrives at her mother’s bohemian retreat on a blazing hot August day. The two were not close in real life and her mother is now lying ‘in wake’ in the cool stone cottage, and Caroline must arrange her funeral. Despite this morbid event, the tone is light-hearted; almost jubilant and even more so when she meets Pattie (Karin Viard) the caretaker and best described as ‘une femme mûre’, who regales her with explicit tales of her recent sexual conquests with various local lads. Later on the corpse of her mother disappears, leading to a police investigation that drifts into a Savannah-style ghost story and an erotic awakening for the bewildered Parisienne.

Gastronomy is a rich theme that weaves through this distinctly Gallic tale. When Pattie is not getting down and dirty with the likely lads – including Denis Lavant as a lecherous Denis Lavant –  she’s cooking up a delicious rustic supper of cassoulet or venison stew washed down with plenty of Corbières al fresco with the locals, dissolving into nights of dancing in the nearby village. A jazzy soundtrack adds to the initial allure of this party-like piece but the arrival of another outside takes the story into more enigmatic territory when André Dussollier turns up as Mamma’s ex lover and, putatively, a famous writer. And while Caroline skypes her husband Manuel (Sergi Lopez) who is keeping the home fires burning back in Paris, the main vibe here is the female chemistry between Pattie and Caroline, her Parisian protegée for the summer, while she is being groomed for some sexual scenarios by various males (including Pattie’s 18-year-old son Kamil – Jules Ritmanic) in the sylvan seclusion of this picturesque corner of France.

Isabelle Carré is delightful to watch as the prim and proper Parisienne who gradually warms to her raunchy surroundings, despite concerns for her mother’s disappearance and pre-morbid state of mind. It emerges that her mother was somewhat of a foxy femme fatale known as “Zaza” locally, and this adds intrigue to her already conflicted mourning process. And the Police investigation takes on an almost folkloric feel as the local gendarme suspects a necrophage at work.

In these sun-soaked surroundings, Caroline is slowly emboldened and yet addled by wine as nothing seems to matter anymore least of all her mother’s funeral, which gently slips to the back burner of this Midsummer Night’s Dream ,where she imagines herself in the sensual arms of all and sundry. And this is one clever feature of the Larrieu’s script; lulling us into one storyline, before revealing the significance of another, whether wittingly or not. 21 NIGHTS is about Caroline’s spiritual development as a woman rather than conflict resolution between mother and daughter. A shame therefore that it gradually sinks into an unnecessarily explicit dénouement when the story runs out of control. Despite their delicious entrée, the Larrieus may hopefully discover that less is always more, even in France, you should never over-egg the omelette. MT