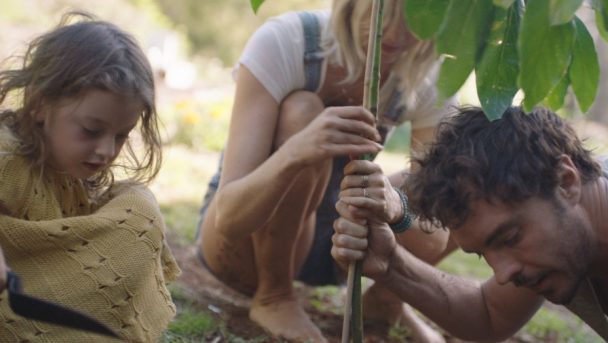 In his well-intentioned eco documentary Australian filmmaker Damon Gameau puts a positive spin on climate change by exploring ways to avoid the meltdown of our planet. With his 21st birthday of his our-year-old daughter in mind, he envisages a sustainable way to retain world resources and preserve our oceans, forests and fauna.

This fast moving doc certainly looks spectacular but often plays out like a glossy advertisement for a future utopia. Gameau combines the usual expert talking heads approach – anthropology professor Geraldine Bell and economist Dr Kate Raworth adding grist and insight – with a series of comic vignettes, info-graphics and glossy widescreen images of how the future could look if we stop destroying the planet and lived sustainably.

It may well be a romantic vision but Gameau has invested time and energy in his investigation which is both informative and laudable, aimed at an audience of young people, but also suitable for adults. Gameau lays out his ideas and information in a concise and cohesive way despite occasionally coming across as over-excited. His narration also puts a saccharine spin on proceedings with his use of phrases such as “my excellent wife”. 2040 eschews a formal three act narrative, opting instead for an episodic full-on approach overlaid by an overbearing score, making this feel like an agitprop.

That said, the ideas he explores are refreshing and grounded in reality. Some of the eco-friendly scientific developments Gameau looks at are still in their infancy. He visits Bangladesh where one man has divised a brilliant method of harnessing and sharing energy from the power of the sun. Meanwhile in Australia a visionary farmer is re-educating other food providers in the ways of soil regeneration that are quite literally ground-breaking. Most of these take the focus away from animal protein in favour of vegetarianism as a way of food for the world’s growing population. He also looks at electric self-driving cars in Singapore, and way of avoiding ocean acidification that are being explored in the waters off the US East Coast.

But a strand about the urgent need to empower and educate women globally feels flimsy and out of context in a doc dedicated to climate change. Gameau’s relentless energy and constant bonhomie lacks detachment occasionally becoming irritating. This is not helped by a manic intrusive score that interferes with our ability to calmly process the importance of the points he is making. And the comic interludes projecting himself – with a grey thatch of hair – into the future are faintly ridiculous, as are the trite Vox pops of kids talking about their own private utopias. MT