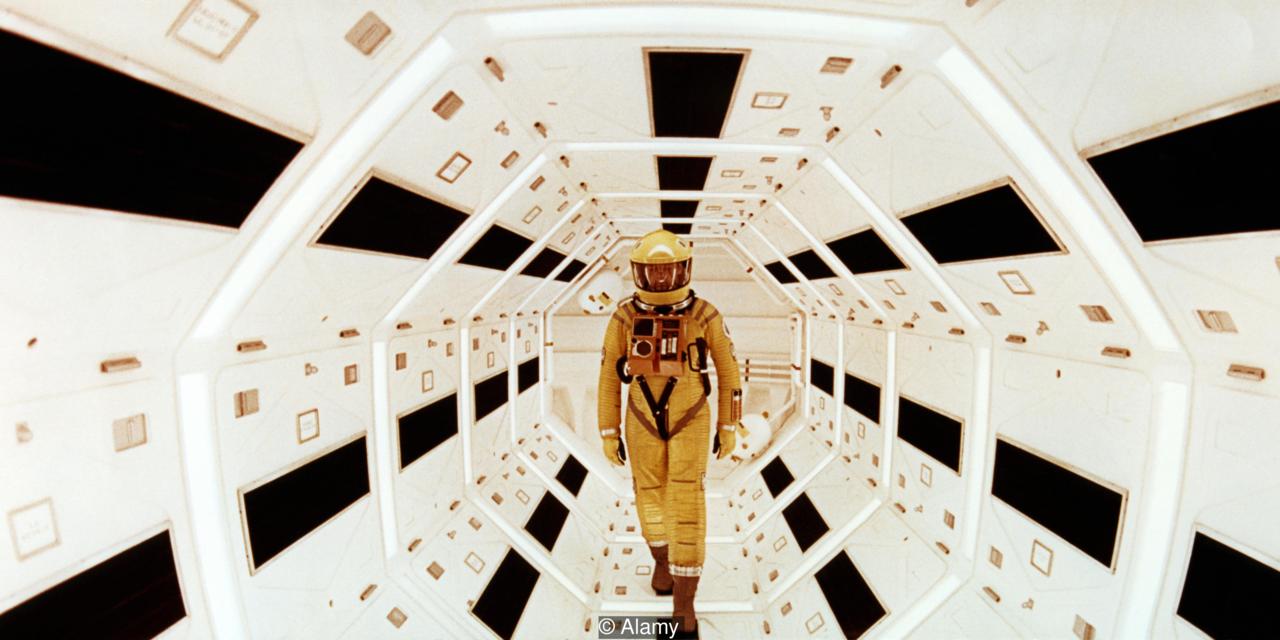 Christopher Nolan presents a Warner Bros 70mm print struck from new printing elements made from the original camera negative in Cannes this year. This is a true photochemical film recreation. There are no digital tricks, remastered effects, or revisionist edits. Stanley Kubrick’s daughter, Katharina Kubrick, his coproducer Jan Harlan and director Christopher Nolan were in attendance.

But who better to define Science Fiction than Arthur C. Clarke, co-author of 2001: A SPACE ODYSSEY, on whose short story of the same name Kubrick’s film is based: “Science fiction is something that could happen – but usually you wouldn’t want it to. Fantasy is something that couldn’t happen – though often you wish it would”. This rather cautious outlook is also at the heart of Kubrick’s film, which does not engage us with the thrills of conventional Sci-Fi films – neither Clark nor Kubrick could come up with plausible aliens and the film is the better for it – presenting, rather, a visual/philosophical treaty. To start with, 95 of the 141 minutes are without dialogue, dominated by classical music and/or images – the dialogue could have easily been written on the inter-titles used in silent films. Needless to say, there are no statements or solutions just questions about a future, which remains enigmatic and open to all sorts of interpretations in the final images.

The first Homo-Sapiens opens the proceedings: some apes are thrilled by the appearance of a strangely glittering monolith – inspired by his awe. One of them uses a bone as tool, jubilantly throwing it into the air, where it transforms into a spaceship. Part two opens with the discovery that the same monolith has been found on the moon. It transpires that it is sending electronic signals to Jupiter. We witness space flights, as ordinary and routine as rail travel. Part three is set in 2001, when a secret mission is send to Jupiter, to find out if Aliens are responsible for the signals from the moon. There are five astronauts on board of the spaceship; three of them are scientists, kept in coffin-like boxes, put into an artificially induced coma. Commander Bowman (Duella) and his deputy Poole (Lockwood) are keeping an eye on the instruments, but their work-rate is minimal, since the super-computer HAL 9000 (voiced by Douglas Rain), who is infallible, is in charge of the journey. When Bowman and Poole find out that HAL is malfunctioning, they huddle in a closet to resolve the matter, but HAL is able to lip read and tries to do away with the whole crew. Firstly he kills the three scientists, then he cuts Poole’s air supply off when he is out in space. Bowman tries to rescue him but HAL sabotages his efforts. The computer than locks the space ship, to leave Bowman in space, but the commander outsmarts him and switches him off, HAL pleading like a human, for his life. After a journey illuminated by whirling colours, Bowman ends up in a flat full of Louis XV furniture, where he quickly grows old and dies. At the foot of his bed stands the monolith like a sentinel.

Music plays a central role in decoding the film: The opening scene is dominated by Richard Strauss’ “Also sprach Zarathrustra” (a re-occurring theme of the film; the docking sequences of part two are accompanied by the Johann Strauss’ waltz “An der schönen blauen Donau”; Bowman’s and Poole’s lonely life on board of the spaceship is mournfully underscored by Aran Khatchaturian’s “Gayane’ Ballet Suite and György Ligeti’s Requiem is the leitmotif of the whole film.

Even after 50 years, and without any CGI, the images of A SPACE ODYSSEY are still fresh and do not give away the real age of the film. Kubrick used simple tricks, like the scene with the ballpen in the spaceship, which seems to float, but was in reality only glued to a plate of glass. The images of the astronauts floating in space were achieved with circus equipment and models in real size, filmed against a black background, the camera shooting from the floor upwards. This way, the ropes under the ceiling were hidden by the body of the stuntman; the audience has the illusion, to watch him floating from a sideways position. Music and visuals are dominating; the underlying philosophical questions, particularly the role of the computer, are still  topical and evergreen and overall 2001: A SPACE ODYSSEY still feels modern and wonderful to watch. AS