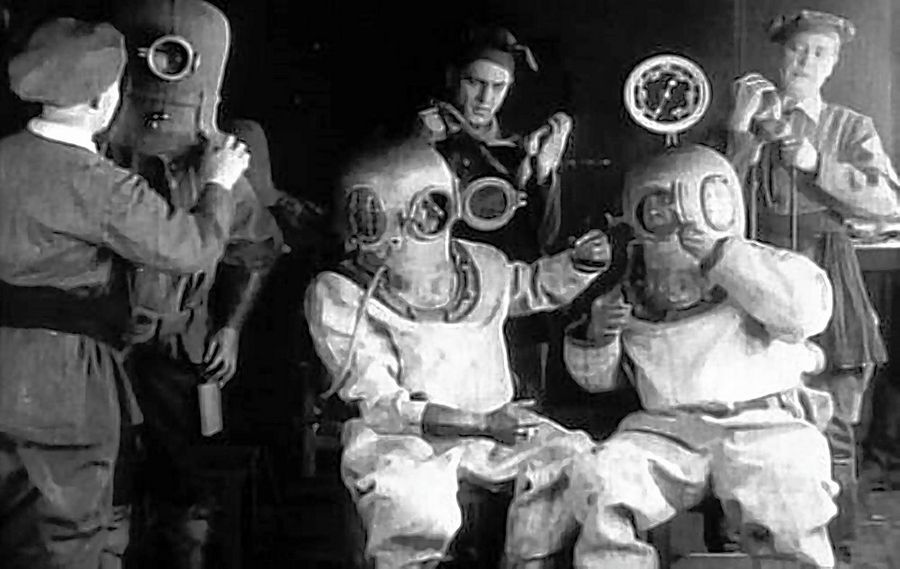 A remarkably lavish production that seems not content with merely filming Jules Verne’s 1870 novel but for good measure also throws in his later novel ‘L’Île Mystérieuse’ and a concluding flashback that – as the subtitles themselves admit – owes nothing to Verne but must have made an already expensive production needlessly extravagant (Universal’s Carl Laemmle took a bath – if you’ll pardon the expression – on the reported $500,000 he spent on it).

The most remarkable aspect of the film is the pioneering underwater photography supervised by the brothers Ernest & George Williamson (some of it shot in the Bahamas) depicting the view from Captain Nemo’s famous picture window, the camera lingering lovingly on strikingly modern-looking actuality footage of coral reefs and shoals of fish. When Nemo’s crew get into their diving suits there is then remarkable footage of them interacting with actual sharks; although the realism abruptly evaporates in a later scene involving an extremely phony looking octopus.

The film’s makers quickly lose interest in a straight adaptation of Verne’s novel at this point, and the action transfers to a mysterious desert island whose one human inhabitant is initially a boisterous ‘child of nature’ played by Jane Gail in dusky body makeup, who jauntily trades in her cheetah skin sarong for a fetching combination of blouse and trousers provided by one of the visitors. (Quite a few adventure films from this period that I’ve seen have put the leading lady in trousers.) Nemo, alias Daaker, turns out to have been an Indian prince in a previous life, and Miss Gail turns out to be his daughter, as is explained in a flashback thrown in climaxing in a native uprising. The film had at this point seemed to be drawing to its conclusion; which makes the insertion of this very expensive looking sequence reportedly featuring almost 2,000 extras all the more bewildering.

The extraordinary underwater footage aside, the handsome and atmospheric look of the rest of the film probably owes more to the photography of Eugene Gaudio (whose elder brother Tony’s long career at Warner Bros. included The Adventures of Robin Hood) than to the rather perfunctory direction of Stuart Paton, who should have told Allen Holubar as Nemo and the unidentified actress playing his late wife not to wave their arms around so much. Other reviewers have commented on the resemblance of the uniform worn by Captain Nemo and his crew to the one traditionally worn by Santa Claus. @Richard Chatten