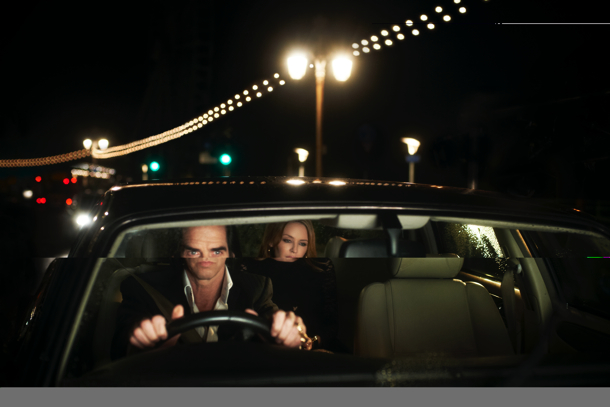 Far from being a vanity project for musician Nick Cave, this is very much a tribute to the visually inventive talents of British filmmakers, Iain Forsyth and Jane Pollard. Brighton is also a prominent character seen through lowering skies as angry clouds drift by giving the piece a tormented and even impressionistic feel. Quite rightly so: it’s what you might expect from the life of an prodigiously creative (song)writer who has seen years of drug abuse and soul-searching finally to have come to rest in this prosaic Sussex coastal town with his wife and twin boys.

Thankfully, this is not a talking heads documentary. Most of the time the camera follows Cave: waking up in bed (fully clothed); venturing out in his comfy Jaguar; driving to his recording studios in a windswept seascape; performing and writing in the company of his fellow band members. Through confessions to his analyst a great deal is learnt about his formative years in Australia, his relationship with his father, who appears to have been a strong influence in his idyllic sunny childhood. One of the most memorable episodes is a magical sequence of dreamy prose where Cave describes his ‘love at first sight’ meeting with his wife, who remains an enigmatic presence.

20,000 Days of Earth feels like an intimate stream of consciousness from the musician himself: a biopic film noir with Cave as the charismatic villain. With his Goth hair and ghoulish persona, Cave emerges as both intellectual and rakish; outlandish yet extremely down to earth. But even if you haven’t heard of him or fail to appreciate his music: this is a film to watch and to enjoy. By the end we really enter his world and feel a understanding: and that’s the success of this watchable rockumentary. MT