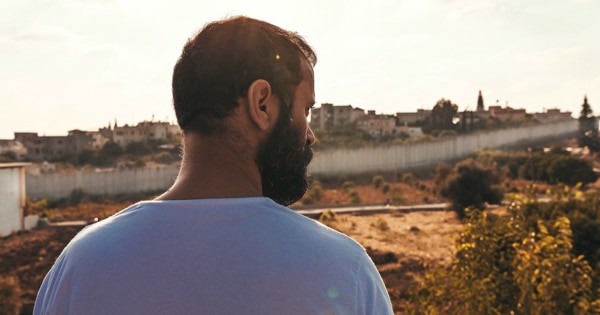 In his first feature Palestinian writer/director Ameen Nayfeh tries his best to stand on the fence while exploring human rights infringements caused by the border between his homeland and Israel.

200 Meters refers to the distance between a family living on the contentious wall dividing Palestine and Israel. Mustafa (Suliman) is stayIng with his mother on the Palestinian West Bank, while his wife Salwa (Zreik) and the couple’s three children Noora, Majd and Maryam are just two hundred meters away on the Israeli side of the barrier but the family can see each other during the daytime, Mustafa crosses over to work in Israel.

His son Majd is a Liverpool fan, and particularly fond of their Egyptian striker Mohamed Salah. His mother is keen to enrol him with an Israeli football team, Maccabi, but Mustafa favours a Palestinian side. Salwa is much more pragmatic than her husband who is driven by ideology.

One day, Mustafa fails the finger print test at the border facilities, his work permit has expired and he is sent back. A day later Majd is injured in a car accident and Mustafa if forced to use a team of people smugglers to get him over the border to visit his son in hospital. The smugglers take his 350 Shekel fee, but Mustafa is forced to wait until more passengers arrive.

Along comes Anne (Unterberger), a German filmmaker who is crossing over to video a family wedding with her companion Kifah (Malees). Also in the car is Sami, a young man is search of work, and Mustafa suggests his own uncle and boss Aba Nidal (Abbas), as a possible employer. But the crossing is a botched affair and both drivers and passengers are left stranded: One of the smugglers attacks Anne, believing that she a Mossad agent, and knocks her out before fleeing. Sami almost manages to climbs over the border wall before a rival gang causes him to fall and break two ribs. Mustafa’s only chance is Anne, and her German passport. But can he trust her, or should he side with Kifah, who suspects Anne of being in league with the Israelis.

200 Meters is shot imaginatively in documentary style by DoP Elin Kirschfink. And although the ensemble acting is impressive, Anne’s near permanent presence takes away too much from the central conflict given that her character is never really satisfactorily explored leaving a gaping hole in our understanding of her role. Nayfeh’s flaws are those of a new filmmaker and he will have learned a great deal from his first outing, handleD masterfully on a shoe string budget. AS