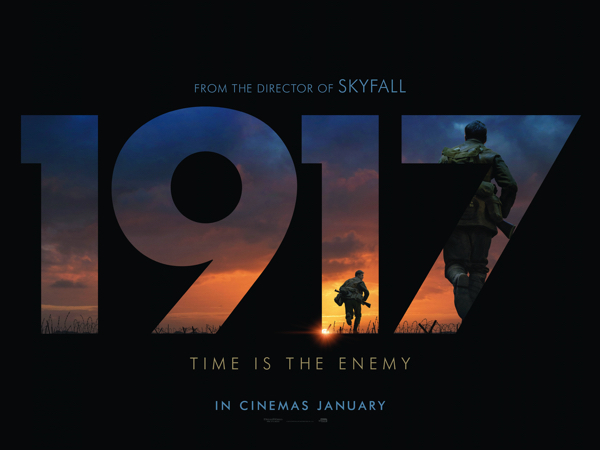 This exhilarating epic allows us to experience the terrors and triumphs of the First World War at first hand as we follow two young soldiers tasked with taking vital dispatch across enemy lines in France in April, 1917.

The green pastures of spring scattered with snowy cherry blossoms never looked so welcoming as they did during those final months of conflict. Scenes of hellish devastation are in brutal contrast to this rural idyll and make 1917 an exquisitely poignant memoir to the pity of war. Sam Mendes’ single-shot action thriller is audacious and deeply affecting adding another poignant chapter to the combat cannon. Working with young screenwriter Kyrsty Wilson-Cairns, the film’s structural flaws are eventually overcome by the sheer magnificence of this worthwhile tribute to the many who lost their lives defending liberty.

Dedicated to Mendes’ great-grandfather, 1917 also serves as a emotional touchstone for those of us who lost family in the conflict. Boyish young men who blithely volunteered to serve their country, but who never returned from the carnage, losing their lives, their innocence and hope in the hostilities. 1917 also gives the crew a chance to show off some technical brilliance – Roger Deakins’ agile camerawork is one of the most gratifying aspects of this saga, ambitious in scale but intimate in its simple premise: a race against time and in hostile terrain to deliver a life-saving letter.

In a glittering cast, the two leads in question, George Mackay plays lance corporal Schofield and Chapman a lance corporal Blake, don’t initially inspire our confidence. But as the narrative gets underway, Schofield triumphs as a naive and rather aimless soldier whose courageous qualities eventually come to the surface when the going gets tough. The two are given an almost fatal mission by Colin Firth’s heavyweight General Erinore. To cross the trenches via No Man’s Land into purportedly vacated enemy territory, and personally serve a hand-written letter that will stop 1600 soldiers charging to their untimely deaths. The kicker is that Blake’s brother is in the regiment concerned, and so he has a vested interest in his perilous mission.

George MacKay really looks the part: he could be your own great grandfather or uncle. It’s a demanding role: mentally and physically, but he rises to the occasion that tests his acting skills to the limit. And by the end we’re behind him and invested in his journey and the extraordinary and unexpected challenges that are thrown his way. The pacing is breathless, occasionally relieved by more upbeat scenes: at one point Schofield meets an almost happy go lucky regiment who play a vital part in the grand finale. This gives Mendes a chance to enrich his drama with textural and cultural references and convincing characters, even adding flinty humour.

Expertly edited by Lee Smith, this surreal reverie glides along seamlessly the occasional bout of brutal violence tempered by tender moments that introduce a civilian dimension of the conflict – we see Schofield comforting a young French woman and her tiny baby giving them milk from recently slaughtered cows. And although the war is full of horror and hostility, 1917 highlights the intensity of the feel good factor: the kindness of strangers and the goodness of mankind. MT