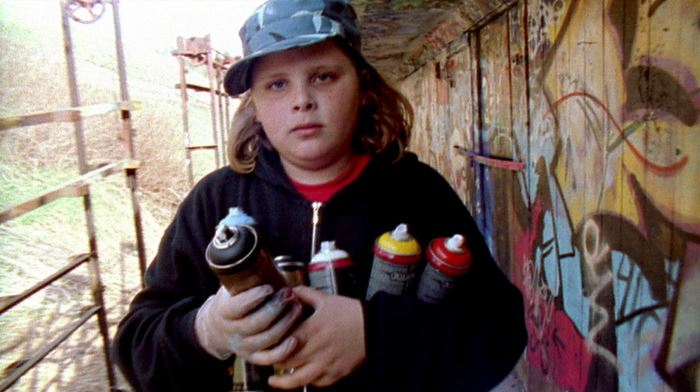 Mia Engberg (Belville Baby) grew up on the Hasselby Estate near Stockholm in the seventies and eighties. In this upbeat documentary she re-visits the high rise blocks of her youth, built to house people away from the densely populated city Hasselby grew out of a progressive housing policy at the time, but like most estates all over the world, it failed to encouraged the social inclusion of the inhabitants.

To start with, Hasselby is not a hopeless project like the soulless estates around Paris, or some of the slums of Glasgow: it is run down, but there is still a living spirit, a sort of constructive resistance against an establishment which has dumbed low income away from the capital. Shot between autumn 2004 and 2005, Engberg concentrates on four young people, who use their creativity positively, as so manage to rise rise above their environment, at least for some of the time.There is Ayesha, a young woman, born in Tanzania, who has lived all over the world, including India. At a benefit gig for Palestine, Ayesha shows an Israeli flag, which is grabbed by a blond girl, who later criticises her for showing “a symbol of imperialism and racism”. But she isno match for the feisty Ayesha, who tells her flat out “that not all Israeli’s are bombers, neither are all Palestinians”. We learn later, that her music video had been shown on MTV. An Italian boy Frazze (12) is the youngest of the four. Suffering from depression and ADHD, he has been expelled from school and put his family through a traumatic time but after taking up spray painting with the elder boys, and was looking forward to his new school.

Chliean Julio, is a musician who finally found love after a dispiriting battle with the authorities after a failed attempt to withdraw cash from an ATM, left him thousands of of Euros in dept In the end, he never got his money back, back found a girl friend in his native Chile, who came back to Sweden with him. With his brother he raps in front of the Nordea bank ATM which “cheated” him.

“Dino” his real name is withheld and his face is partly blacked out, because he is an illegal “painter”, has been arrested many times and fined more than 70000 SK for spraying tube trains and buildings. He talks about his hobby as an addiction – a dangerous one, because one of his friends had been shot whilst “working”. He and Ayesha get together for the summer celebration of Hasselby, but their paintings are seen as too radical and anti-American. They have to paint a new background for the stage, but the concert is a great success.

In spite of structural looseness, 165 Hasselby is a very lively portrait. Shot in guerrilla filmmaker style, Engberg’s portrait is non-judgemental and she treats her protagonists with respect – and in Ayesha’s case, admiration. AS