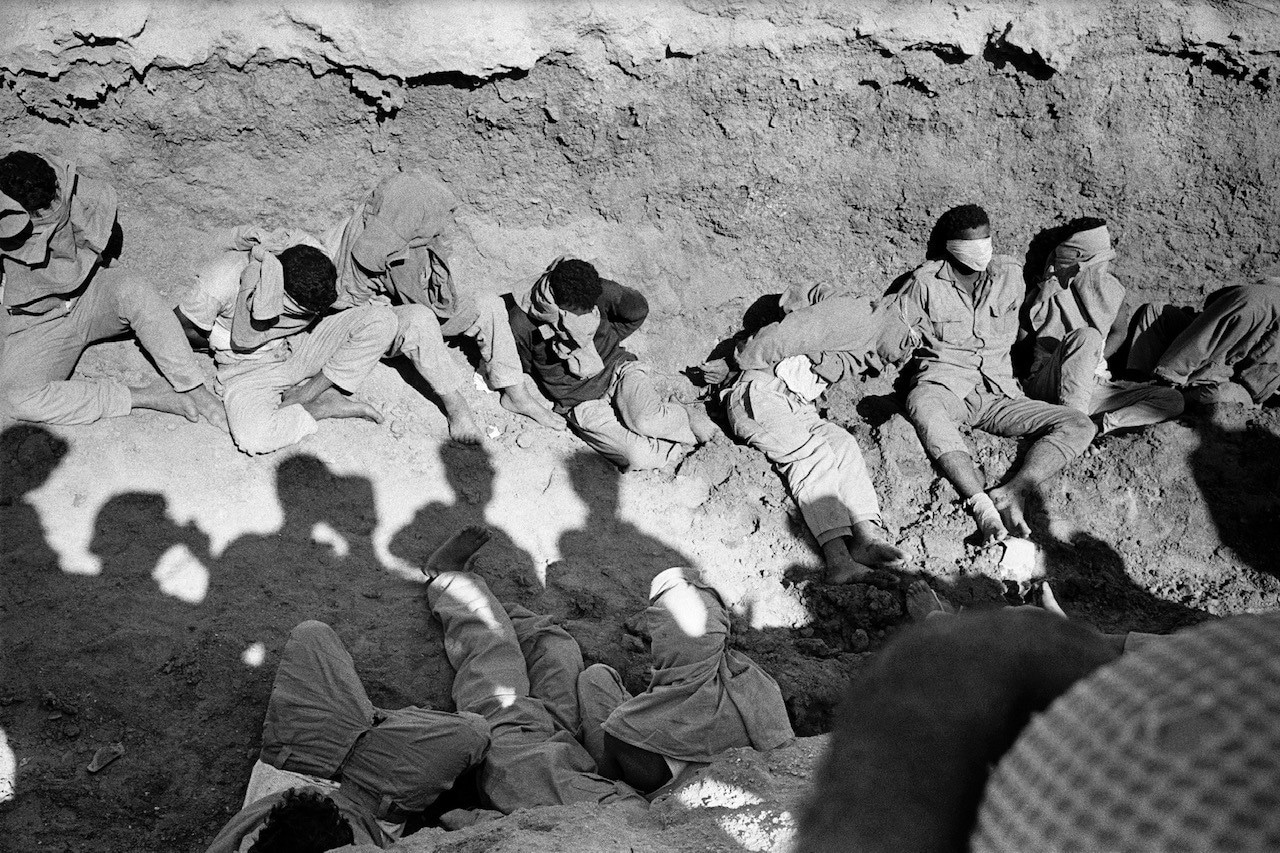 The career of renownd Israeli photo reporter Micha Bar-Am (1930-) is the subject of this new documentary from Ran Tal who makes use of the copious archive material, cleverly counterposing images of love and war as the film title expressively suggests.

Stark and staggeringly powerful in its simplicity each frame tells a story for Micha Bar-Am who admits (in voiceover): “not everything is worth remembering, sometimes you have to forget and move on”. As Micha takes us through 1341 iconic photos that form the bulk of his life’s work, his wife Orna, the assiduous curator of his archive, or one of his sons chips with comments or questions, and inevitably voices are often raised. Micha explains how as a young man it felt entirely natural just to grab a camera, some clothes and a rucksack and set off to capture Israel in 1960s and 1970s. after arriving there as a small boy of six.

A native German speaker Micha Bar Am spent his early childhood in Berlin under the name of Michael Anguli, and later moved to Israel. His family were never close or emotionally expressive, but he was happy to be there with them and Israel soon became his natural home, as it is for all Jews from the Diaspora: “I never felt like an immigrant and wanted a Hebrew name”. So soon he became a Zionist and took the name he still has today. After 20 years of reportage in Israel Micha returned to Germany where he became ‘an emissary at a dramatic point in time for the nation’ taking part in some scientific projects for the government.

Away from Israel his images took on a freer dimension, “the reality wasn’t so intense” – a swan in a park, people enjoying a picnic or a trip to the mountains, or a kibbutz`. Back in Israel his photos were more serious: a fire engulfing an office building in Tel Aviv; IDF soldiers guarding a checkpoint. One of his first photography awards proved that success can come out of someone else’s tragedy. The still showed army officers holding up a little girl who had been kidnapped and drowned in the river by her neighbour.

He would go on to document the history of Israel with his camera, including Adolf Eichmann’s trial in 1961, The Six-Day War in 1967, the Yom Kippur War in 1973 and the massacre of Sabra and Shatila in 1982. The 1967 war had given him a chance to cut his teeth at combat photography yet these images are accompanied by a light-hearted folk song about Rabin and Nasser. The Yom Kippur War also gets its moment with the terrible symmetry of the bodies of POWs bound and gagged and thrown into a ditch. Although he was not proud of these images, he knew it was his duty to record them: “you seek out danger to feel alive”. Another image shows a brief moment of triumph when an Israeli flag waved for five minutes in history over the Dome of the Rock; another sees a soldier wearing a string of bullets just like a prayer shawl that, on later reflection, seemed to represent religion and power, Micha grew to hate the image, along with one picturing desperate refugees carrying their suitcases away from their homeland.

These carry the same emotional freight as the birth of his son Barak in 1967, Orna is seen during labour (with baby Barak) and these intimate pictures were the first of their kind to published in a newspaper in Israel. The scenes are accompanied by cries and a heartbeat. Barak later complains of his embarrassment when the images were shown on television. But Micha was intensely happy at creating life, rather than capturing war or death in his lens. In stark contrast, the ‘bananas’ crater moment’ was a low point for him. The tortured images of ambushed PLO fighters lying dead in the road, made him feel ashamed: “it’s an ugly sight….of the hunters and the prey”.

Lighter but no less meaningful shots picture Marlene Dietrich in a cafe in Tel Aviv’s Dizengof Street, and a high school trip across the mountains where Micha expressed his love for his new girlfriend Orna “by carrying things”. But behind the scenes, son Barak regrets the lack of family life when growing up, recalling how his father was often irritable rather than warm or emotional – his parents lived for their work and never had a family holiday, “you raised children incidentally as you rushed along”. A sentiment that most creative people will be familiar with. Orna complains that her husband never stopped taking photos even when he came home: “I tried to salvage the family-focused footage from the work-orientated stock, but eventually gave up”. But whether documenting family life or the horrors of conflict, Israel is always in the background, a land without peace. MT

1341 FRAMES OF LOVE AND WAR is supported by yesDOCU.