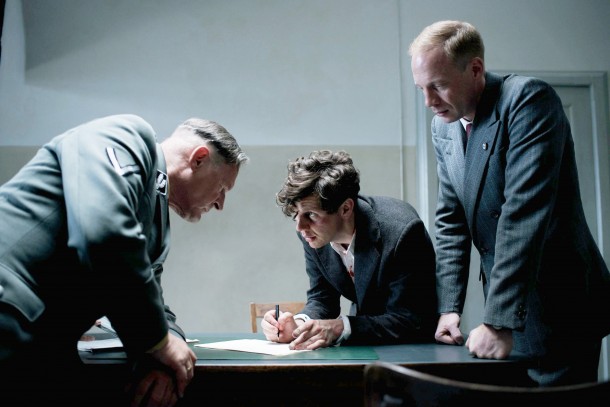 On the 8th of November 1939, George Elser tried to assassinate Adolf Hitler in the Bürgerbräu Keller in Munich, where Hitler and the NSDAP leadership celebrated their failed “Beer Hall Putsch” of 1923. Due to a forecast of fog, Hitler decided to leave early for Berlin at 21.07, thirteen minutes before Elser’s bomb exploded, bringing part of the roof down and killing eight people.

We meet Elser (Friedel, The White Ribbon) in 1932 first near the Bodensee as a young clockmaker, playing the accordion and being quite a ladies’ man. Later he is called home to Koenigsbronn in Swabia, where his father, a drunkard, is unable to keep the family farm going. There he falls in love with the married Elsa (Schüttler), her husband Erich – abusive and alcohol dependent, is suddenly is written out of  the picture. Whilst Elser had sympathies for the Communist Party, he never became a member, but he and Elsa are seen feeding one of his old friends, who has to work in a factory for a nearby concentration camp. After the couple’s baby dies, Elser, seemingly unmotivated, leaves Elsa and builds the bomb to kill Hitler (Schenk).

Steeling dynamite and other material, he spends many nights in the Bürgerbräu Keller to install the bomb. On the night oft he failed assassination, he is caught by border guard s at the Swiss border, carrying tools and technical drawings of the bomb. The next day, Elser is transferred to the Gestapo HQ in Munich, were he is interrogated by Nebe (Klaußner) and Gestapo chief Mueller (von Bülow). Whilst Nebe is certain, that Elser had no help, Mueller supports Hitler’s quest to find his co-conspiritors. Elser is tortured and pumped full of Pervertin, but to no avail. Finally, he is transferred to the KZ Sachsenhausen, where he is treated as a „special prisoner“. After taken to Dachau KZ, he is shot there on April 9th 1945, aged 42.

Oliver Hirschbiegel’s (Downfall/Diana) 13 Minutes is even more sensational, schematised and banal than Klaus Maria Brandauer’s Elser portrait 7 Minutes (1989). Like in Downfall, Hirschbiegel personalises and simplifises historical events, and reduces them to emotional tear-jerkers. Told in recurring flashbacks, the narrative is reduced to episodes, giving the film little coherence. Everything is without contradictions: Elser’s hometown is first an arena for the fighting communists and fascists, then suddenly a model Nazi town.

Hirschbiegel never explains why the great majority of Germans were so willing to follow Hitler, whose lust for hysteria, sadism and utter (self)destruction they shared. Instead, we are seeing the demure female minute taker (Pernthaler) during interrogations, who tears Elsa’s photo from the file and gives it to Elser. Worst of all, Nebe, chief of the Kripo (Criminal Police), who already joined the Nazi Party in 1931, and was responsible for he “Einsatzgruppen” in Russia, who murdered Jews and mental patients, is shown as a humanist, who is kind to Elser. After the failed Officer’s coup of July 1944, he is hanged with piano wire, his long drawn-out death another example of endless scenes of “torture porn”.

Hirschbiegel is obviously not alone, choosing sentimentality instead of analysis, showing the Nazis, not as murderous racists but instead resorting to trivia. And why do some films about the Nazi period humanise mass murders like Nebe? In the end, the director even minimalises his hero for an aesthetic stunt: flames are reflected in Elser’s goggles, whilst he is welding his bomb. 13 Minutes does not do Elser any justice, good ensemble acting is not enough to save a film, in which camera and narrative conspire to hide the truth just to give the audience a spectacle. AS