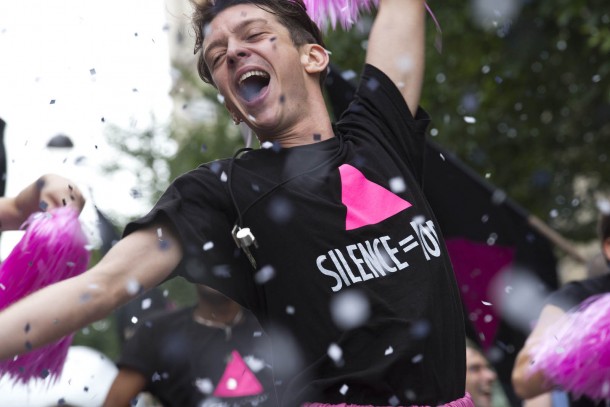 Robin Campillo’s follow up to Eastern Boys is a cinéma vérité style drama that reflects  his own years as an AIDS activist during Mitterand’s 1990s government. It makes a brave and honest attempt to communicate the frustration felt by many sufferers of the disease through an organisation that calls itself Act Up.

120 BEATS feels quite conventional in style, and clearly Campillo feels so strongly about the film’s themes that he has decided not to be too ambitious artistically – the result is rather bland and overlong at 142 minutes, but certainly valuable as a lasting testament to the era, and a fight that continues. Most impressive are the naturalistic performances, particularly from Hanaele as the strong-minded Sophie, and the evocative score with tunes from Bronski Beat.

The film opens with during a rowdy meeting of Act Up in a brightly lit venue where clicking of fingers replaces clapping as a signal of approval. The group’s members, not all sufferes, are encouraged to be vocal and expressive. There follows a raucous demonstration in the offices of a drug company refusing to release its test results. There are romantic interludes with rather overplayed graphic sex that takes place between the feisty young Chilean French Sean (Nahuel Pérez Biscayart), who has fully blown Aids,  as he falls for HIV-negative Nathan (Arnaud Valois). Their relationship is only really examined in the light of Sean’s illness and none of characters is fleshed out enough for us to engage with their plight, which is a shame.

Artistically there are one or two inventive flourishes such as when the sparkles from the disco lights are transformed into the virus, but it’s clear that Campillo does not want to cloud his central message with aesthetic mastery. Also, the aggressive energy generated by some of the more unappealing characters make it difficult for us to feel for them in their plight, despite Campillo’s witty script. Beats per Minutes has garnered much critical acclaim for its important subject matter, but a worthy theme alone does not make film brilliant and this is a decent but unremarkable third feature from Campillo. MT