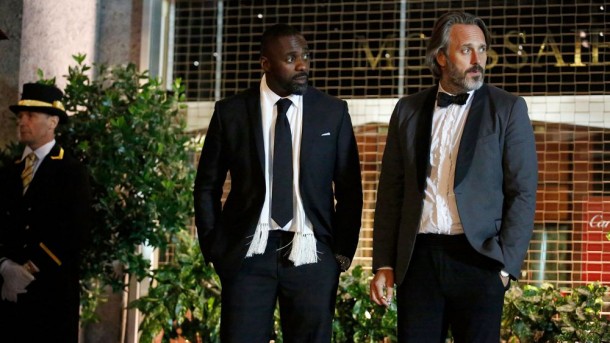 Dir: Jim Hanlon A trio of family stories run side by side in Jim Hanlon’s clichéd contemporary drama that has its heart in the right place: a cosy corner of South West London where tower blocks rub shoulders with sophisticated squares. But whilst Hanlon’s British drama feels predictable, it also feels quite real: the rich are having plenty of sex, the middle class are striving, the poor are forced to resort to crime – and the intelligentsia are sitting back and analysing it all. 100 STREETS  has Idris Elba as a bored rugby star cheating on his yummy mummy wife Gemma Arterton who gets her own back (with Tom Cullen) – while rushing around John Lewis with the kids. He claims to ‘work hard’ but there’s absolutely no evidence of this in his days spent snorting coke, drinking and appearing on TV. The second strand sees earnest cabbie Charlie Creed-Miles going through a gruelling adoption process with his modest charity-worker wife (Kierston Wareing) before a fatal road accident takes away his confidence, but strengthens his marriage. And finally, drug-dealing Black teenager Franz Drameh finds inspiration and redemption through Ken Stott’s philosophical retired actor, who he meets while doing community service in a graveyard . These characters are all well-fleshed in their everyday predictability, and what is entirely predictable too is that this British indie drama will end in meltdown melodrama. Ken Stott and Franz Drameh give the most enjoyable performances in a film that is watchable enough while it lasts, but instantly forgettable as you leave the cinema. MT